A+ A-
Print Email
New Nigerian President Muhammadu Buhari vowed on Friday to eradicate the "mindless, godless" militant group Boko Haram and rescue hundreds of women and children held captive, including 200 girls taken from the town of Chibok a year ago. 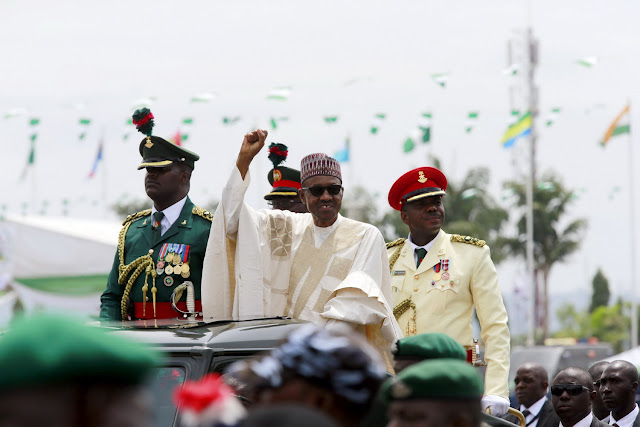 Nigeria's new President Muhammadu Buhari rides on the motorcade while inspecting the guard of honour at Eagle Square in Abuja, Nigeria May 29, 2015. Photo: Reuters/Afolabi Sotunde

In his inaugural address as elected leader of Africa's most populous nation and biggest crude producer, Buhari also painted a picture of an economy in crisis after this year's collapse in the price of oil, which accounts for the bulk of state revenue.
"The armed forces will be fully charged with prosecuting the fight against Boko Haram," the 72-year-old former military ruler announced in the heart of the capital. A Muslim, he said the group was "as far from Islam as one can think of".


"We cannot claim to have defeated Boko Haram without rescuing the Chibok girls and all other innocent persons held hostage," he said. "This government will do all it can to rescue them alive."
Hundreds of other Boko Haram captives have been freed by the military in recent weeks, but the Chibok girls, whose capture caused a global outcry, have still not been found.
Buhari's March election win was Nigeria's first democratic transfer of power. He inherits a host of problems from his predecessor Goodluck Jonathan, whose five-year tenure was marked by aimless security and foreign policy-making, as well as corruption scandals.
Depleted foreign reserves, vastly reduced oil revenues, corruption and the escalating cost of servicing debt had left the economy in "deep trouble", he said.
He made no mention of the naira, the currency, which economists say may be headed for another devaluation.
Importantly, he held out an olive branch to his political opponents in the oil-rich Niger Delta, saying his administration would continue to invest heavily in projects in the region that have underpinned an amnesty by militant groups there.
Come-back
Three decades after he first came to power in a military coup, Buhari's swearing-in marks a remarkable political turn-around from authoritarian ruler to born-again democrat following his landslide victory at the ballot box in March.
His oath was followed by the release of dozens of white doves, symbolising peace. Many of Nigeria's 170 million people also interpreted it as turning the page on five years of disappointment and frustration under Jonathan.
"Jonathan was so bad, very bad. Now the incoming president will do something for us," said Mutawali Bukar, a businessman from the northeast city of Maiduguri, the epicentre of the Boko Haram insurgency.
Thousands in Abuja's Eagle Square chanted "Sai Buhari", which means "All hail, Buhari" in the northern Hausa language.
The spirit of optimism is, however, tempered by the reality in which Nigeria finds itself, and much depends on Buhari's choice of ministers, particularly in key portfolios such as finance, internal security and oil.
"Now it's time for the heavy lifting," said Bismark Rewane, chief executive of Lagos-based consultancy Financial Derivatives. "Do you have the team that is respected by the international community, that has the pedigree and the background to deal with the management issues?"
Yemi Osinbajo, a Christian lawyer from the southwest region that includes Lagos, is vice-president, a deliberate counterpoint in the religiously mixed nation to Buhari, who is from the predominantly Muslim north.
Although his roots are in the military, not economics, Buhari served as head of the Petroleum Trust Fund under Sani Abacha, another military ruler, giving him insight into the murky world of crude oil production.
"New chapter"
Befitting Buhari's modest style, there was little fanfare in the capital ahead of the swearing in, with security checkpoints leading to Abuja's Eagle Square and a few green and white national flags lining its main expressway.
The ceremony was attended by numerous African leaders and foreign dignitaries including U.S. Secretary of State John Kerry.
A senior U.S. official said Washington, which had strained ties with Jonathan's administration, was ready to expand military cooperation, including sending advisors to help train Nigeria's army against Boko Haram.
"We have every indication that we'll be able to start a new chapter," the official said.
Dozens of African countries were represented by heads of state, who stand to gain if Buhari can breathe new life into the economy and restore Abuja's diplomatic credibility and clout.
South African President Jacob Zuma was a notable guest, a sign of Pretoria's desire to improve relations with Abuja after a series of diplomatic spats, most recently over a wave of attacks on foreigners in South Africa this year.