A+ A-
Print Email
THERE were tense scenes in a Dublin office yesterday as workers begrudgingly assembled at the desk of a hated co-worker to sing ‘Happy Birthday’ and give her a cake. 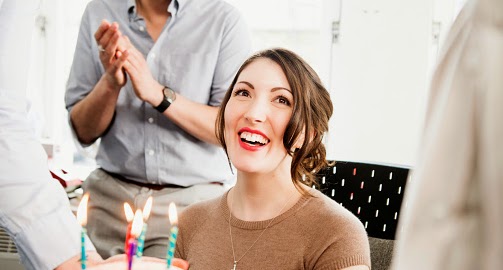 Grace O’Lanney, a dose from accounts that no-one likes, was celebrating her 34th birthday and received a cake bought with money raised in a whip-around, as well as a card signed by everyone.
Many had balked at buying O’Lanney a cake due to her reputation around the office as a sneering bitch, but head office insisted that no worker could be denied their birthday rights as set out in their contract, which clearly entitles them to a cake and a rendition of ‘Happy Birthday’, however insincere it may be.
The entire office staff made their way to O’Lanney’s desk at four o’clock yesterday afternoon, where they broke into an extremely unenthusiastic version of the birthday song, with many workers choosing to just murmur along instead of singing the proper words.
“I hope she chokes on her fucking cake,” said Liam Kindlon, a frequent recipient of sarcastic remarks about his appearance from O’Lanney.
“There has to be some sort of reform in the birthday protocol around here; we can’t just be having a whip-around for everyone, it’ll have to be treated on a case-by-case basis. This craic of having to sing ‘Happy Birthday’ to the worst person you’ve ever met is an abuse of our human rights”.
O’Lanney responded to the office’s birthday wishes by telling them that “they could all use singing lessons” before boxing up her cake to take home, as opposed to the generally accepted procedure of dividing it among the office.
Nhãn: Lifestyle