A+ A-
Print Email
Pope Francis, who helped broker a historic thaw between the United States and Cuba, held talks with Cuban President Raul Castro on Sunday ahead of the pontiff's trip to both countries in September. 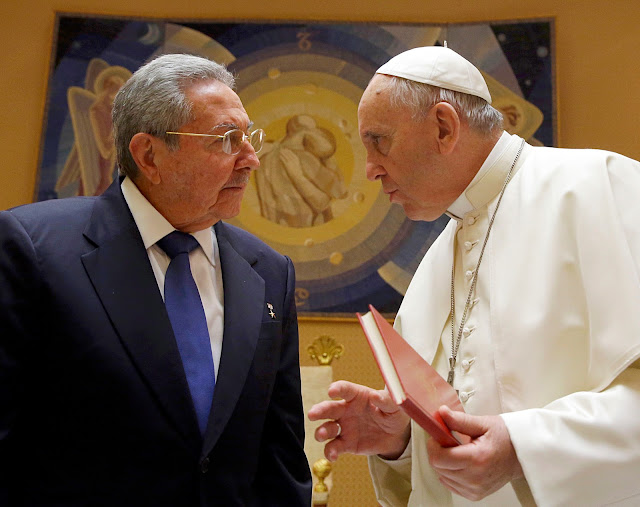 The brother of Cuba's revolutionary leader Fidel spoke with the pope for nearly an hour - unusually long for a papal meeting - during a visit the Vatican said was strictly private and not a state visit.


Pope Francis (R) talks with Cuban President Raul Castro during a private audience at the Vatican May 10, 2015.Photo: Reuters
Papal audiences on Sundays are extremely rare. Francis made an exception when Castro asked if he could stop in Rome on his way back from Moscow to thank Francis for the Vatican's mediation between the United States and Cuba, Cuban officials said.
During the picture-taking session at the end of the meeting, the pope told Castro of the need to work together to fight poverty around the world.
Castro was also due to meet Italian Prime Minister Matteo Renzi later on Sunday before leaving Rome.
The first Latin American pope leveraged the Vatican's ties to both countries, writing letters to Castro and President Barack Obama to help foster December's historic announcement of the resumption of diplomatic relations between the former foes after more than half a century of antagonism.
The pope's U.S. trip had been planned for some time before the Vatican announced last month that Francis would stop in Cuba on his way to Washington.
Francis is expected to stay in Cuba at least two days, Vatican sources said.
It will be the Argentine pope's first visit to both countries as pontiff. His predecessors John Paul II and Benedict XVI, visited Cuba and met Fidel Castro.
This year, the leader of the world's 1.2 billion Roman Catholics is also due to make trips to Bosnia in June, Ecuador, Bolivia and Paraguay in July, and several African countries towards the end of the year.