A+ A-
Print Email
The UN's humanitarian chief has said she is "extremely concerned" that Nepal's customs authorities are slowing the delivery of earthquake aid, as the death toll from the disaster crossed 7,000 on Sunday. 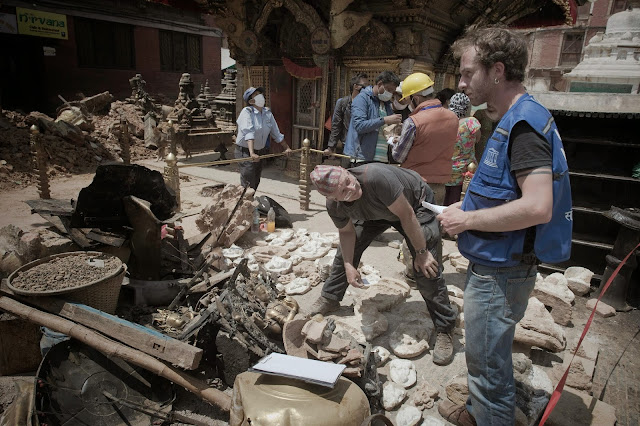 This picture taken on May 2, 2015, shows UNESCO staff sorting religious and historical artifacts at the damaged Swayambhunath temple in Kathmandu, following a 7.8 magnitude earthquake which struck the Himalayan nation on April 25. Photo: AFP

After the government ruled out finding more survivors buried in the ruins of the capital Kathmandu, the focus was shifting to delivering aid to families and others in far-flung areas of the devastated nation.
But the UN's head of humanitarian affairs Valerie Amos said she was worried the foreign aid pouring into Nepal in the wake of the impoverished country's deadliest earthquake in more than 80 years was being held up by red tape.
"I was extremely concerned to hear reports that customs was taking such a long time," Amos told AFP in Kathmandu on Saturday, saying she had asked Prime Minister Sushil Koirala to speed up customs clearance for aid materials.
"He has undertaken to ensure that happens, so I hope that from now we will see an improvement in those administrative issues."
The 7.8-magnitude quake wreaked a trail of death and destruction when it erupted around midday eight days ago, reducing much of Kathmandu to rubble and even triggering a deadly avalanche on Mount Everest.
The death toll from the disaster has hit 7,040, according to the Emergency Operations Centre, with more than 14,000 injured. More than 100 were also killed in India and China.
Although multiple teams of rescuers from more than 20 countries have been using sniffer dogs and heat-seeking equipment to find survivors in the rubble, no one has been pulled out alive since Thursday evening.
"Rescue operations are still under way, but focus has shifted to providing relief," home ministry spokesman Laxmi Prasad Dhakal told AFP on Sunday.
"Many far flung villages have been affected," he said, adding that there was still an "acute shortage" of tents for the hundreds of thousands left homeless.
Planes loaded with relief supplies from around the world were pouring into landlocked Nepal, but there have been numerous reports of many getting stuck at Kathmandu's small international airport, and even customs officials stopping trucks filled with aid from crossing into the country from neighbouring India.
The manager of Kathmandu's Tribhuvan International Airport said very heavy planes were being barred from landing because of concerns about the condition of the single runway after the quake and a series of strong aftershocks.
"We have issued a notice saying that aircraft with a total weight exceeding 196 tonnes will not be allowed to land at Kathmandu airport," Birendra Prasad Shrestha told AFP.
"There are no visible cracks in the runway but there have been so many tremors recently that we have to take precautions - we don't know what's happening below the surface.
"This runway is the only lifeline for Kathmandu -- if it goes, everything goes."
Mountainous terrain
The exact scale of the disaster was still to emerge, with the mountainous terrain in the vast Himalayan nation complicating the relief effort.
With relief workers still to reach many areas, the Red Cross has warned of "total devastation" in far-flung areas, including in the hardest-hit Sindhupalchowk region, northeast of Kathmandu, where whole villages have been destroyed.
The latest UN's situation report says teams that have arrived in another devastated district, Gorkha, have discovered a "dire need for shelter, particularly tents and blankets".
"Access to some remote villages remains a key challenge as many landing zones are unsafe due to debris, altitude and current weather conditions," the report also says.
"Road access is limited. Some remote villages can only be accessed by helicopters."
In Kathmandu, tens of thousands of survivors have been living out in the open in the eight days since the quake, having either lost their homes or fearful that aftershocks could bring teetering buildings to the ground.
The UN says more than 160,000 homes have been destroyed and another 143,000 damaged.
"We are not living in this tent out of choice. We are here because we have nowhere to go," said Dhiraj Thakur who has been camped out since the quake in Tundikhel Maidan, an open area in the centre of the city.
The UN children's fund UNICEF has warned of a race against time to avert an outbreak of disease among the 1.7 million youngsters estimated to be living in the worst-hit areas, with monsoon rains just a few weeks away.