A+ A-
Print Email
A suicide bomber blew himself up at a Shi'ite mosque in eastern Saudi Arabia during Friday prayers, residents said, killing around 20 people and wounding more than 50, local residents and a hospital officials said. 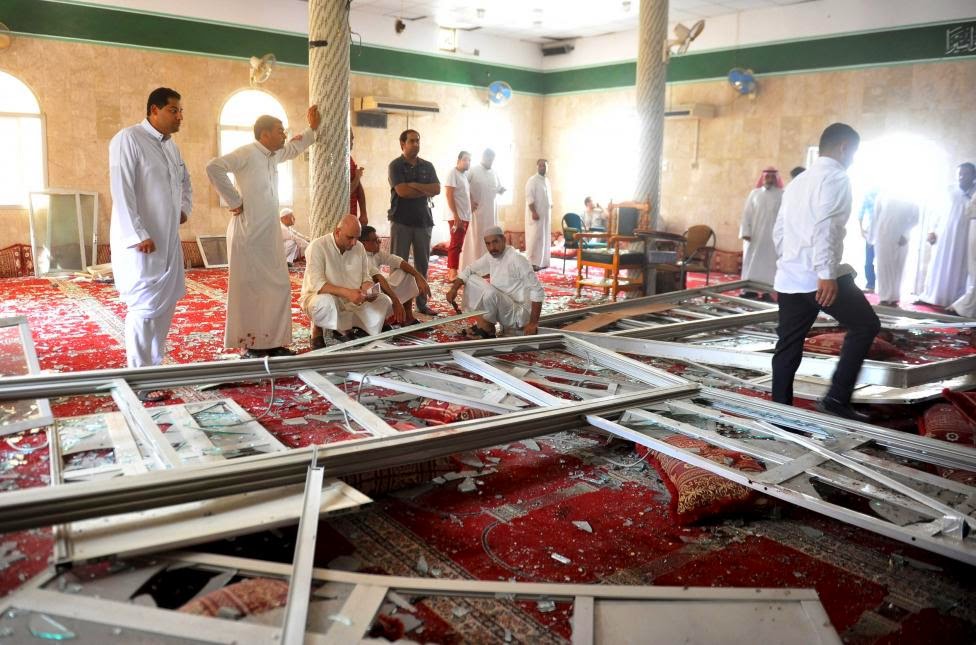 Family members of victims and well wishers are seen after a suicide bomb attack at the Imam Ali mosque in the village of al-Qadeeh in the eastern province of Gatif, Saudi Arabia, May 22, 2015.

No one immediately claimed responsibility for the bombing, the first to target Shi'ite Muslims in Saudi Arabia since November when gunmen killed at least eight people in an attack on a Shi'ite religious anniversary celebration, also in the east where most of the country's minority Shi'ites live.
The attack could further harm relations between Sunnis and Shi'ites in the Gulf region, where tensions have risen during weeks of military operations in Yemen by a Saudi-led coalition against Houthi fighters seen as proxies of regional Shi'ite power Iran.


One witness described a huge explosion at the Imam Ali mosque in the village of al-Qadeeh where more than 150 people were praying.
"We were doing the first part of the prayers when we heard the blast," worshipper Kamal Jaafar Hassan told Reuters by telephone from the scene.
A spokesman for the Saudi Interior Ministry, calling the attack an act of terrorism, said the bomber detonated a suicide belt hidden under his clothes inside the mosque, causing a number of people to "martyred or wounded".
"Security authorities will spare no effort in the pursuit of all those involved in this terrorist crime," the official said in a statement carried by state news agency SPA.
A hospital official told Reuters by telephone that "around 20 people" were killed in the attack and more than 50 were under treatment at the hospital, some of them suffering from serious injuries. He said that a number of other people had been treated and sent home.
A photograph posted on social media showed the mutilated body of a young man, said to be the bomber. Other pictures showed ambulances and bloodied victims being taken away on stretchers.
In April, Saudi Arabia said it was on high alert for a possible attacks on oil installations or shopping malls.
In Yemen, a bomb at a Houthi mosque in the capital Sanaa on Friday was claimed by Islamic State.