A+ A-
Print Email
Leave it to the country music community to know how to greet members of our military.
Because during a special night at the Grand Ole Opry on May 19, the red carpet was fresh and ready for the arrival for some noteworthy people. And while country stars such as Trace Adkins, John Conlee, Larry Gatlin & The Gatlin Brothers, Vince Gill, Lee Greenwood, Craig Morgan and Kellie Pickler were scheduled to appear on this night, it was the soldiers from Fort Campbell, Kentucky and the Tennessee National Guard as well as the MusiCorps Wounded Warrior Band that received the biggest ovation.
In fact, in this particular clip, you can see stars such as Pickler, Atkins and Gatlin taking it upon themselves to greet these special members of our military as they made their way through the red carpet arrival parade.
“I think it’s so important that you know that we do not take what you do for granted,” Pickler said after a performance from the MusiCorps Wounded Warrior Band. “We love you all and are so thankful to have you all here tonight to celebrate.”
The night was just another one for the Opry, which is currently celebrating its 90th Anniversary Celebration and spending the month of May honoring our country’s military in partnership with the USO and MusiCorps. 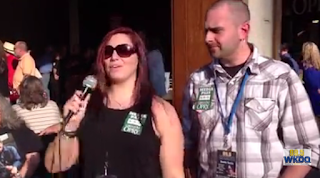