A+ A-
Print Email
WHEN Dublin suburbanite Peter O’Hanlon left his home this morning, the refuse skip he had hired had just been delivered, ready to be filled with two rooms worth of rubbish from his under-refurbishment house. 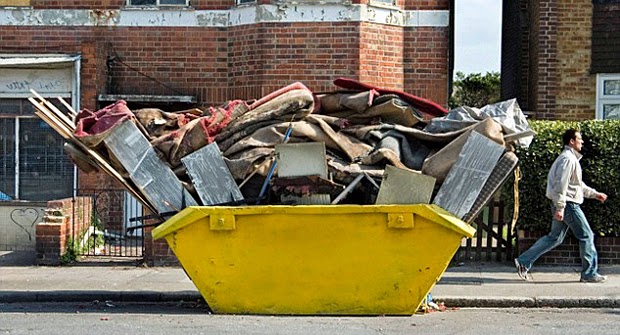 Little did he suspect that when he returned home that night, his neighbours would have rallied together to fill the skip for him, with rubbish donated from their very own dwellings.
The heartwarming project began soon after O’Hanlon left, when his neighbour from two doors down, known only as “the Polish lad”, put two bags of recyclable household refuse into the skip, having missed Green Bin day last week.
As the rest of the neighbourhood woke to see that the skip was still practically empty, they began a push to donate as many old children’s toys, rusted barbeques and car batteries as they could muster.
In an incredible anonymous donation, one neighbour contributed an entire three-piece sofa suite and two whole mattresses.
“We couldn’t bear to see our neighbour with an empty skip” said Sheila McMahon, who referred to O’Hanlon as the “lad up the road with the Civic”.
“But to see it get filled so quickly is a testament to the community spiritl, but we don’t want thanks for doing this… it was our pleasure”.
Upon arriving home, O’Hanlon was nearly moved to tears by the sight of the bursting skip, and spent the rest of the night rummaging through the rubbish for any clues as to which of his neighbours filled it for him.
Nhãn: Lifestyle