The Seasons Affect How Your Genes Work

A+ A-
Print Email
A-choo! While they may be prevalent all year round, people tend to get struck down with coughs and sniffly colds more frequently during the colder and wetter times of the year. But this apparent increase in illness doesn't end with tissues and bottles of cough mixture; more severe conditions like heart disease and autoimmune diseases such as type-1 diabetes and rheumatoid arthritis also seem to spike when the nights draw in. Researchers might have finally figured out what's going on. 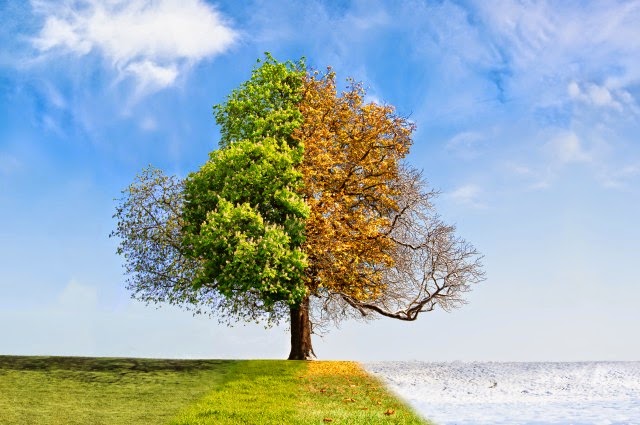 It would seem that the seasons have an acute effect on how our genes function. After looking at the expression of over 22,000 human genes, scientists from Cambridge University discovered to their surprise that around a quarter showed clear signs of seasonal variation. What’s more, those involved in regulating the immune system were more active during the winter months.
“This is a really surprising – and serendipitous – discovery,” says Professor John Todd, co-author of the study and director of the JDRF/Wellcome Trust Diabetes and Inflammation Laboratory. “In some ways, it’s obvious – it helps explain why so many diseases, from heart disease to mental illness, are much worse in the winter months – but no one had appreciated the extent to which this actually occurred.” 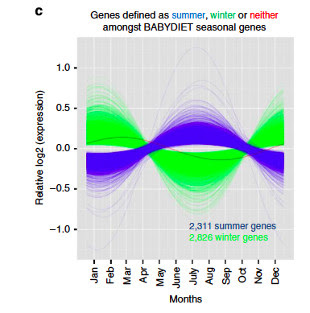 Expression of genes vary from season to season. Image credit: Castro Dopico et al.
The team analyzed blood from more than 16,000 people living in both hemispheres. What they found was that the genes involved with regulating immunity, specifically those to do with inflammation, were far more active during the cold winter months. Whilst this might help the body to fight off minor infections like colds, the researches say that it could bring about more serious conditions such as rheumatoid arthritis and heart attacks due to this surge of inflammation.
Even more fascinating was that the seasonal gene activity of those living in The Gambia didn’t match the summer/winter pattern of activity observed in countries further from the equator. Instead, the gene activity was higher in the rainy season. The researchers speculate that this could be due to the fact that certain infectious diseases such as malaria are more prevalent during this time of year. In Iceland, there was little seasonal change in activity, presumably because they have 24 hours of daylight followed by 24 hours of darkness.
“We know that humans adapt to changing environments,” says Dr. Chris Wallace, another of the authors. “Our paper suggests that human immune systems adapt to show different seasonal variation in equatorial regions with fewer distinct seasons compared to regions at higher and lower latitudes with more pronounced differences between winter and season.”
What the researchers were not able to determine, however, was whether the gene activity increased due to an rise in infection during the winter months, or if there is some other natural cue that the body uses to start its yearly cycle. It’s already been established that changes in the environment – such as hours of daylight – can influence our internal body clock, and thus gene activity, so perhaps this might also come into play here.
Amazingly the research, published in Nature Communications, could have an impact on when we vaccinate. They found that a set of genes linked to people's response to vaccination were also more active during winter, suggesting that vaccines might be more successful if given during this period when the immune system was already ‘primed.’
So it would seem that seeking out a bit of winter sun to make yourself feel better might not be a bad idea after all.
Nhãn: Health-Science