A+ A-
Print Email
Thousands of people were still missing in Nepal on Friday as food and help began to trickle through to those stranded in remote areas after last week's earthquake which killed 6,250. 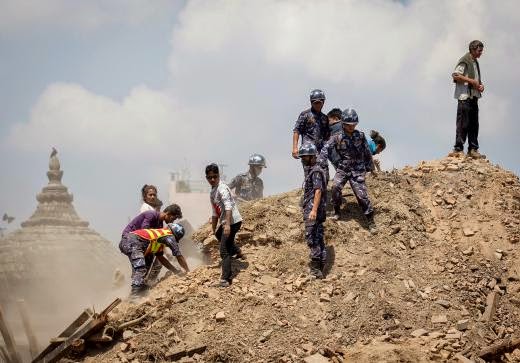 The death toll could rise further. Bodies are still being pulled from the debris of ruined buildings, while rescue workers have not been able to reach some remote areas.
The government put the number of injured at more than 14,350.
In the capital Kathmandu, many unclaimed bodies were being quickly cremated because of the need to avert disease and reduce the stench of corpses in areas where buildings had collapsed.
"Morgues are full beyond capacity and we have been given instructions to incinerate bodies immediately after they are pulled out," said Raman Lal, an Indian paramilitary force official working in coordination with Nepali forces.
Many of the dead could be migrant workers from neighbouring India, local officials said.
The head of the European Union delegation in Nepal said up to 1,000 Europeans were still unaccounted for, mostly around popular trekking routes.
Officials said it was hard to trace the missing because many backpackers do not register with their embassies.
"It does not mean that they are buried. They could have left the country without telling anyone before the earthquake struck," Ambassador Rensje Teerink told reporters.
Another EU official, speaking on condition of anonymity, said: "A number of EU citizens are not accounted for, but this could be for many reasons. It is fast moving and very fluid and estimated numbers are only estimates."
The number of people unaccounted for from France, Italy, Spain and the Netherlands is 371, according to checks Reuters made with these governments, while all Irish citizens, Croatians and Romanians have been traced. Other European nations have yet to provide an updated figure for how many of their citizens are unaccounted for.
Aid was slowly reaching remote towns and villages nestled in the Himalayan mountains and foothills of the impoverished nation. But government officials said efforts to step up the pace of delivery were frustrated by a shortage of supply trucks and drivers, many of whom had returned to their villages to help their families.
"Our granaries are full and we have ample food stock, but we are not able to transport supplies at a faster pace," said Shrimani Raj Khanal, a manager at the Nepal Food Corp.
Army helicopters have air-dropped instant noodles and biscuits to remote communities but people need rice and other ingredients to cook a proper meal, he said.
Many Nepalis have been sleeping in the open since the 7.8 magnitude quake, with survivors afraid to return to their homes because of powerful aftershocks. According to the United Nations, 600,000 houses have been destroyed or damaged.
Information Minister Minendra Rijal said the government would provide $1,000 in immediate assistance to the families of those killed, as well as $400 for cremation or burial.
The U.N. said 8 million of Nepal's 28 million people were affected, with at least 2 million needing tents, water, food and medicines over the next three months.
Unprecedented damage
Finance Minister Ram Sharan Mahat said Nepal would need at least $2 billion to rebuild homes, hospitals, government offices and historic buildings and appealed for international backing.
"This is just an initial estimate and it will take time to assess the extent of damage and calculate the cost of rebuilding," Mahat told Reuters.
Prime Minister Sushil Koirala told Reuters earlier this week the death toll from the quake could reach 10,000.
That would surpass the 8,500 who died in a 1934 earthquake, the last disaster on this scale to hit the nation sandwiched between India and China.
Home ministry spokesman Laxmi Prasad Dhakal said that though the 1934 quake was more powerful, fewer people lived in the Kathmandu valley then.
"The scale of reconstruction will be unprecedented," Dhakal said.
While international aid has poured in, some Nepalis have accused the government of being too slow to distribute it.
"There have been cases where villages have pelted stones on trucks carrying aid and food supplies. They must have been really hungry and angry to do so," said Purna Shanker, who works at the government's commodity trading office.
In Sundarkhula, a village close to the quake's epicentre west of Kathmandu, villagers said they were searching their destroyed homes for food.
Bharat Regmi, 28, said he jumped out of the first floor as the quake lifted his house from its foundations. When he went back a few days later, he and two of his friends found a bag of potatoes in the rubble.
"We are living on water and whatever we can dig out from the house," he said, standing under steady rain near the highway to Kathmandu. Later, he crept back under a thin orange sheet, shared with about a dozen other villagers.
Tensions have also flared between foreigners and Nepalis desperate to be evacuated.
In the Himalayas, climbing is set to reopen on Mount Everest next week after damage caused by avalanches is repaired, although many have abandoned their ascents.
An avalanche killed 18 climbers and sherpa mountain guides at the Everest base camp.