A+ A-
Print Email
Everyone is different. That’s a simple truism, but it’s is also true when it comes to how people respond to diseases; some people are laid low and others shrug off the same ailment.
And it’s true of genetic diseases. Even when two individuals carry the same mutation, the severity of the disease may vary between them.
Sometimes this is due to environmental variation, but in other cases it reflects additional genetic changes that also influence how the disease affects that person. Some people will have other harmful mutations that combine with the main disease gene to make the condition worse, while more fortunate people may have inherited other variations, actual beneficial mutations, that reduce or even eliminate symptoms. 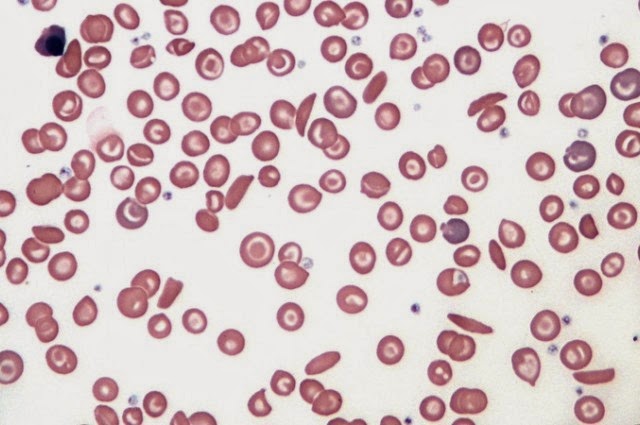 One of the best known illustrations of this phenomenon centres around the inherited blood disorder sickle cell anaemia. This lifelong condition is due to mutations in the adult globin gene – a point mutation in that gene renders it defective and patients suffer from anaemia throughout their lives. The symptoms can be severe. Damaged blood cells can block blood vessels leading to intense pain and even loss of life.
In The Blood
But, as mentioned above, symptoms vary between individuals. Environmental variability also influences symptoms, so affected individuals may be advised to avoid high altitude and oxygen stress, for example. But genetic variations also exist. Some individuals carry a second mutation in the regulatory region of another globin gene that alleviates symptoms of sickle cell anaemia.
These individuals have a benign condition called Hereditary Persistence of Foetal Haemoglobin (HPFH). They have an “up-mutation” in the control region of a separate globin, the foetal globin gene, which boosts expression of that gene. The extra foetal globin can replace the defective beta globin.
I realise that is fairly complicated. But, put simply: humans have several globin genes. The foetal globins are turned on before birth and have a high affinity for oxygen; they enable the baby to snatch oxygen from its mother’s blood. After we are born the adult, or beta globin, gene comes on and the foetal globin gene is shut off.
But in a few people with HPFH the foetal globin gene stays on throughout life. Interestingly, this doesn’t seem to cause any health problems. Individuals with HPFH can even have normal pregnancies. They just have extra foetal globin in their blood.
The crux of the matter is this: if an individual inherits the sickle cell mutation and an HPFH mutation, they have few if any symptoms, because the extra foetal globin does the work of the defective adult globin gene.
So could one effectively “cure” sickle cell anaemia by introducing the HPFH mutation into blood cells affected by the defective adult globin gene?
Switching On The Backup
Well, this is precisely the approach we have taken. Using the new technique of “genome editing”, we have introduced one of the best characterised HPFH mutations, and we find that we can successfully turn on the sleeping foetal globin gene.
At this stage we have only done this in cell lines in the laboratory. To turn this into a therapy, one would have to do it in haematopoietic stem cells – i.e. blood-forming stem cells – from the patient. It would be necessary to achieve a high frequency of editing in enough stem cells to enable repopulation of the patient’s blood with genetically enhanced cells.
Gene Repair
But if it is so easy to edit the genome now, why don’t we just correct the sickle cell mutation rather than introducing a new mutation, albeit a beneficial and benign mutation?
Well, that is certainly a good strategy in the case of sickle cell anaemia, and many people are working on just that. But it may be a less ideal strategy for other blood diseases and various genetic diseases where large genes or regions of the genome are deleted.
In the case of the thalassaemias, for example, many different gene deletions occur. It may not be practical to edit in large gene replacement cassettes, and one would have to design a different insert for each mutation. In contrast, building in the foetal globin activating mutation should provide additional globin and work to compensate in many of these conditions.
Towards Gene Therapy Using Genome Editing
A new age of genetic engineering is beginning, due to the ability to edit the genome using new DNA-cutting tools, with the technical names: CRISPRs, TALENs and ZFNs.
Gene correction or the introduction of beneficial mutations may be important in treatments in the future.
In agriculture they may also be important. Many genome wide association studies have identified beneficial mutations associated with particular prised qualities. Genome editing can also be used to introduce beneficial mutations in this context and may give rise to a new generation of crops and livestock.
The techniques are also interesting because no new or artificial material need be introduced. All one is doing is mimicking a naturally occurring beneficial mutation. The introduction of artificial transgenes has alarmed some parts of society.
Additionally, transgenes are recognised as foreign by some organisms and are shut down by epigenetic silencing, just as computer viruses are recognised and shut down by anti-virus software.
Beneficial mutations are unlikely to be subject to the same limitations. They are already known to work in nature and introducing them to improve human health or in agriculture may have many advantages.
Nhãn: Health-Science