A+ A-
Print Email
The U.S. Marine Corps is bringing together foreign commanders from amphibious forces deployed mostly in the Asia-Pacific for a conference aimed at taking steps to integrate operations, with China excluded from the event, according to officials and planning documents. 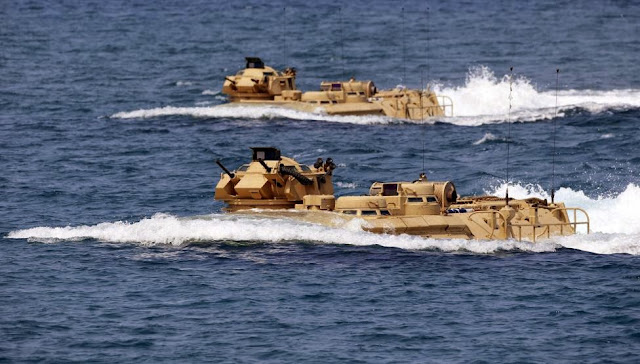 The effort centers on a first-of-its-kind conference between the Marine Corps and military officials from 23 countries that opens in Hawaii on Monday. More than half the nations attending are from Asia, including some embroiled in territorial disputes with China such as Japan, the Philippines and Vietnam.
On the agenda will be amphibious assault tactics, including ship-to-shore assaults, and a demonstration of shore landing tactics, said a USMC spokesman in Hawaii.
A planning document prepared by a consultant to the U.S. military and reviewed by Reuters notes that China should "not be invited" because it's a "competitor" to the United States and some of the countries attending.
Washington has grown increasingly critical of China's assertiveness in the disputed South China Sea, especially its land reclamation around seven reefs in the Spratly chain. Satellite images show at least one airstrip under construction.
A U.S. official said on Tuesday that the Pentagon was considering sending U.S. military aircraft and ships to assert freedom of navigation around the reefs.
Asked about China's exclusion, the Marine spokesman said U.S. law prohibited military-to-military exchanges with China at such events.
U.S. defense officials added that it was not unusual to exclude Chinese military personnel from participating in some training hosted by U.S. forces.
China took part in U.S.-led Rim of the Pacific (RIMPAC) naval exercises last year with more than 20 countries, but one defense official noted its participation was limited to things like humanitarian relief and search and rescue operations.
China's Defence Ministry had no immediate comment.
Chinese Foreign Ministry spokeswoman Hua Chunying said that any country had the right to invite who it wanted to a meeting or event, as long as it was beneficial for maintaining regional peace and stability.
"The militaries of China and the United States have normal exchanges and cooperation on various levels," Hua told a daily news briefing.

Beach landings
Amphibious forces specialize in launching maritime operations including beach landings from boats and helicopters and are often used to deliver and coordinate aid following natural disasters. The vast island-dotted and disaster-prone geography of Asia lends itself to such operations.
A key goal of the Hawaii meeting would be to lay the groundwork for multilateral amphibious exercises, including drills between participant nations, even without U.S. involvement, the planning document said.
On Tuesday, the visiting military officials will observe a U.S. Marine exercise involving helicopter carriers, landing ships and other vessels that will create an offshore sea base that could be used in combat or to coordinate disaster relief.
Brigadier Richard Spencer, deputy commander of the British Royal Marines, who will attend the conference, said it would be a success if it paved the way for participating nations to run joint disaster relief efforts using marine forces.
"My inclination would be to start with a relatively realistic level of ambition ... I would rather set a low bar and achieve it," Spencer told Reuters on the sidelines of a defense conference in the Japanese city of Yokohama.
The U.S. Marines were the "logical integrator" for amphibious capabilities in Asia, which would interest allies like Japan, South Korea and Australia, said Michael Green, senior vice president at the Center for Strategic and International Studies in Washington.
"(It would) also be helpful to other partners dealing with vulnerabilities from natural disasters to encroachment and coercion by large maritime claimants," he said.
China claims most of the South China Sea. The Philippines, Vietnam, Malaysia, Brunei and Taiwan also claim parts of the waterway.
China last month defended its Spratlys reclamation, saying the new islands would provide civilian services such as search and rescue facilities.
Beijing is also at loggerheads with Japan over uninhabited isles in the East China Sea.

An aerial file photo taken though a glass window of a Philippine military plane shows the alleged on-going land reclamation by China on mischief reef in the Spratly Islands in the South China Sea, west of Palawan, Philippines, in this May 11, 2015 file photo.

Harlem globetrotters?
U.S. military planners are concerned that bilateral exercises between American forces and friendly nations around Asia have done little more than show off the U.S. Marines.
In such drills the Marines are like the Harlem Globetrotters, the basketball entertainers who outmatch their hapless opponents, said the consultant to the U.S. military, who declined to be identified because he was not authorized to talk to the media.
With some 80,000 personnel or almost half its strength in Asia, the U.S. Marines are the biggest amphibious force in the region. Most are based on Japan's Okinawa island on the edge of the East China Sea.
With around 12,000 marines, China is a formidable potential foe, say military experts.
Countries in dispute with China over territory in the South China Sea don't have large amphibious forces.
Two late entrants to amphibious warfare training are close U.S. allies: Australia and Japan.
Australia last year launched the Canberra, the first of two planned amphibious ships, each able to land 1,000 troops. Japan, which under Prime Minister Shinzo Abe is pursuing a more muscular defense policy, is training its first marines since World War Two.
Melding an integrated amphibious force in Asia able to divide tasks between nations and operate seamlessly would take time, said Ben Schreer, senior defense strategy analyst at the Australian Strategic Policy Institute.
"The challenges are military complexity, capability standards, limited funding, competing priorities and, in some cases, overlapping claims in the South China Sea," he said.