A+ A-
Print Email
WASHINGTON/COPENHAGEN, April 30 (Reuters) - U.S. Navy ships started accompanying U.S.-flagged commercial vessels passing through the Strait of Hormuz on Thursday, seeking to ensure freedom of navigation two days after Iran seized a cargo ship, U.S. defense officials said.
The officials, speaking to Reuters on condition of anonymity, described the decision as incremental, saying it was a precautionary move expected to be for a limited time involving Navy ships already deployed to the area.
They also stressed that the Navy would not be "escorting" ships, which would involve moving in much closer proximity. One noted the Navy ships would be in communication with the U.S.-flagged vessels and somewhat nearby but not necessarily closely trailing them.
Still, the decision is the latest sign of the heightened tension in the region after Iran detained the Marshall Islands-flagged Maersk Tigris container ship on Tuesday and after Iranian ships followed the U.S.-flagged Maersk Kensington on April 24. 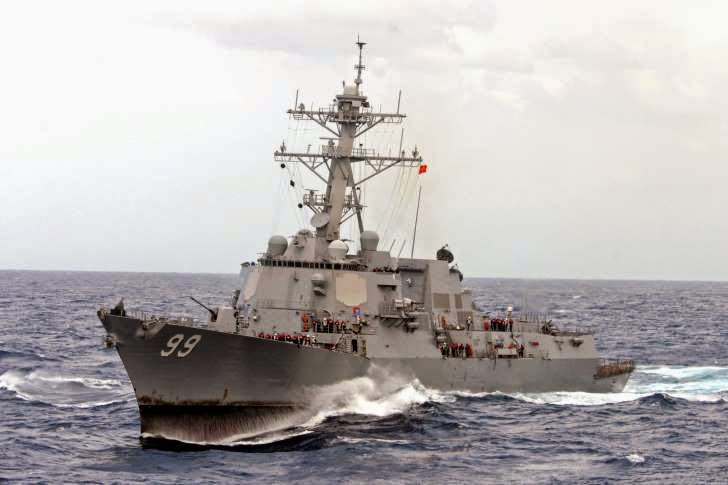 © REUTERS/Aaron Chase/U.S. Navy/Handout The guided-missile destroyer USS Farragut is shown in this undated photo operating in heavy seas in the Atlantic Ocean. Iranian forces boarded a Marshall Islands-flagged cargo ship in the Gulf on…
The Pentagon has said those incidents showed "a pattern of harassment."
Danish shipping giant Maersk insisted on Thursday on the release of the Maersk Tigris and its crew seized by Iran, but an Iranian Embassy statement said the vessel would only be let go once a years-old debt case was settled.
The Maersk Tigris was anchored close to the Iranian port of Bandar Abbas, according to Reuters ship tracking data.
There were 24 crew members on the vessel, mostly from Eastern Europe and Asia, and also a British national.
Maersk had chartered the ship, which according to ship operator Rickmer Shipmanagement is owned by undisclosed private investors. The company met with Iran's Ports and Maritime Organization on Wednesday and said the company "must presume" the seizure was related to the dispute.
"We have, however, not received any written or formal confirmation that the seizure and the cargo case are connected," the company said in a statement.
NUCLEAR TALKS
The incident occurred at a critical juncture in U.S.-Iranian relations, which could thaw should a tentative nuclear deal between Tehran and six world powers including Washington be clinched. It also coincides with heightened tension between regional rivals Iran and Saudi Arabia over the civil war in Yemen, in which they support opposing sides.
Maersk, the world's biggest container shipping line, said it had agreed to pay an Iranian company $163,000 after an Iranian court ruling in February which related to a dispute about 10 container boxes transported to Dubai in 2005.
"The Iranian company appealed the case seeking a higher compensation," Maersk said.
"Only today, 30 April, have we learnt that the appeal court has ruled Maersk Line to pay $3.6 million. As we do not have the details of the ruling, we are not able to comment hereon, nor at this point speculate on our options."
A statement from the Iranian Embassy in Copenhagen said the Maersk Tigris was owned by Maersk and that it had been apprehended in Iranian waters. It said the Danish Embassy in Tehran had been informed of the case as it progressed.
"Naturally the ship will be released after settlements of debts by Maersk Shipping Line and will be allowed to sail to its final destination," the statement, dated April 29 but posted on Thursday, said.
"Iranian authorities reiterate that there has been absolutely no political or security intentions or considerations behind the incident," the statement said. (Additional reporting by Jonathan Saul; Editing by Janet Lawrence and Cynthia Osterman)
Nhãn: World-Region