US targets IS leaders with multi-million-dollar bounties

A+ A-
Print Email
The United States ratcheted up pressure on the leaders of the Islamic State jihadist group on Tuesday, adding four names to those targeted by multi-million-dollar bounties. 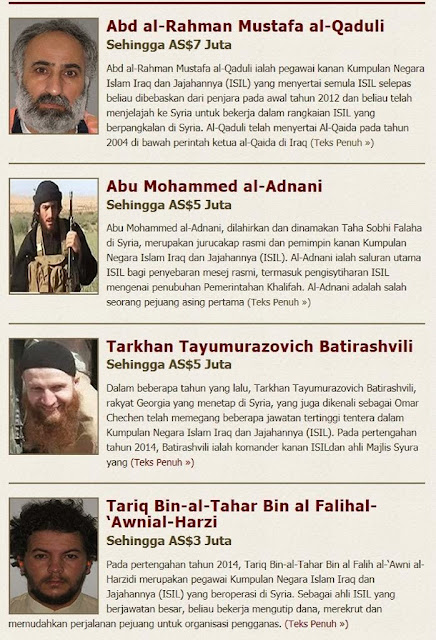 The IS group has seized a wide stretch of eastern Syria and northern Iraq and declared it a "caliphate," within which it has enslaved female captives, carried out sectarian massacres and murdered hostages.
Iraqi and Kurdish security forces are fighting back, supported by Iranian advisors and a US-led air coalition, but IS is holding on in its heartland and allied groups have sprung up as far away as Libya and Nigeria.
Tuesday's statement from the State Department adds four names to the list of high-value US targets sought by the "Rewards for Justice Program."
The militant with the largest price -- $7 million (6.25 million euros) -- on his head is Abdel Rahman Mustafa al-Qaduli, who was designated a global terrorist for the purpose of US Treasury sanctions in May last year.
The State Department alleged that he had been a deputy to the late leader of Al-Qaeda's Iraqi faction, Abu Musab al-Zarqawi, and had travelled to Syria to join the IS group in 2012 after he was freed from an Iraqi jail.
The US Treasury lists Qaduli as an Iraqi, born in either 1957 or 1959 in the city of Mosul.
A Syrian militant, Abu Mohammed al-Adnani, whose birth name is Taha Sobhi Falaha and who is approximately 38 years old, is now subject to a five-million-dollar reward for information leading to his death or capture.
The statement describes him as an IS spokesman who has repeatedly called for attacks on the United States.
Tarkhan Batirashvili, better known under his Arabic nom de guerre as Omar al-Shishani, is also under a five-million-dollar reward.
The 29-year-old Georgian is accused of overseeing a prison outside the IS stronghold of Raqa where several foreign hostages were held.
There is a three-million-dollar bounty on the head of Tariq bin al-Tahar bin al-Falih al-Awni al-Harzi, a 33-year-old Tunisian.
He is accused of acting as an IS fundraiser in the Gulf states and later as a field commander in Syria and as head of a unit of suicide bombers.
The Iraqi leader of the Islamic State group, Abu Bakr al-Baghdadi, was already the subject of a $10-million reward under the program.