A+ A-
Print Email
The United States vowed on Thursday to keep up air and sea patrols in international waters after the Chinese navy repeatedly warned a U.S. surveillance plane to leave the airspace over artificial islands China is creating in the disputed East Vietnam Sea. 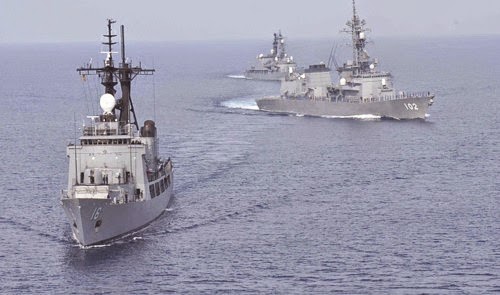 Japanese Maritime Self-Defence Force's destroyers Harusame (DD-102) and Amagiri (DD-154 behind Harusame) sail near Philippine warship BRP Ramon Alcaraz (PF 16) as they make a formation during their joint naval drill in the East Vietnam Sea, in this handout photo taken May 12, 2015.

The Chinese navy issued eight warnings to the crew of a U.S. P8-A Poseidon, the U.S. military's most advanced surveillance aircraft, when it conducted the overflights on Wednesday, according to CNN, which was aboard the U.S. aircraft.
When the American pilots responded by saying the plane was flying through international airspace, a Chinese radio operator said with exasperation: "This is the Chinese navy ... You go!"
The Poseidon flew as low as 15,000 feet (4,500 meters), CNN said, and video provided by the Pentagon appeared to have been taken from directly above one artificial island.
The incident, along with recent Chinese warnings to Philippine military aircraft to leave areas around Vietnam’s Truong Sa (Spratly) archipelago in the East Vietnam Sea, suggested Beijing is trying to enforce a military exclusion zone above its new islands there.


Some security experts worry about the risk of confrontation, especially after a U.S. official said last week that the Pentagon was considering sending military aircraft and ships to assert freedom of navigation around the Chinese-made islands.
The senior U.S. diplomat for the East Asia, Assistant Secretary of State Daniel Russel, told a media briefing in Washington the U.S. reconnaissance flight was "entirely appropriate" and that U.S. naval forces and military aircraft would "continue to fully exercise" the right to operate in international waters and airspace.
He said the United States would go further to preserve the ability of all countries to move in international waters and airspace.
"Nobody in their right mind is going to try to stop the U.S. Navy from operating - that would not be a good bet," he said.
"But it's not enough that a U.S. military plane can overfly international waters, even if there is challenge or hailing query ... We believe that every country and all civilian actors should have unfettered access to international waters and international airspace."
A spokesman for China's Foreign Ministry said he was not aware of the incident.
"China has the right to engage in monitoring in the relevant airspace and waters to protect the country's sovereignty and prevent accidents at sea," ministry spokesman Hong Lei said in a regular briefing.
He said China hopes “the relevant country can earnestly respect China's sovereignty” in the East Vietnam Sea.
Hive of construction
Footage taken by the P8-A Poseidon over the new islands, and aired by CNN, showed a hive of construction and dredging activity, as well as Chinese navy ships nearby.
CNN said it was the first time the Pentagon had declassified video of China's building activity and audio of challenges to a U.S. aircraft.
"We were just challenged 30 minutes ago and the challenge came from the Chinese navy," Captain Mike Parker, commander of U.S. surveillance aircraft deployed to Asia, told CNN on the flight.
"I'm highly confident it came from ashore, this facility here," Parker said, pointing to an early warning radar station on Fiery Cross Reef.
Military facilities on Fiery Cross Reef, including a 3,000-metre (10,000-foot) runway, could be operational by year's end, one U.S. commander recently told Reuters, and Washington is concerned China will use it to press its extensive territorial claims at the expense of weaker rivals.
China claims sovereignty over most of the East Vietnam Sea, through which $5 trillion in ship-borne trade passes every year. The Philippines, Vietnam, Malaysia, Taiwan and Brunei also have overlapping claims.
Chinese Foreign Minister Wang Yi last week asserted Beijing's right to reclaim the reefs and said China's determination to protect its interests was "as hard as a rock."
China has also said it had every right to set up an Air Defense Identification Zone (ADIZ) in the East Vietnam Sea but that current conditions did not warrant one.
ADIZs are used by some nations to extend control beyond national borders, requiring civilian and military aircraft to identify themselves or face possible military interception.
During the P8-A Poseidon mission, the pilot of a Delta Air Lines flight in the area spoke on the same frequency after hearing the Chinese challenges and identified himself as commercial. The Chinese voice reassured the pilot and the Delta flight went on its way, CNN said.
Delta Airlines did not immediately respond to a request for comment.