Vietnam: Photos that defined the war

A+ A-
Print Email
On the 40th anniversary of the fall of Saigon and the official end of the Vietnam War, we look back at a collection of the seminal images that came to frame the conflict in the world’s eyes.
Pictured, a soldier of the 1st Cavalry Division, 12th Cavalry, 2nd Battalion, relaxes on June 24, 1970, before pulling out of Fire Support Base Speer, six miles inside the Cambodian border. 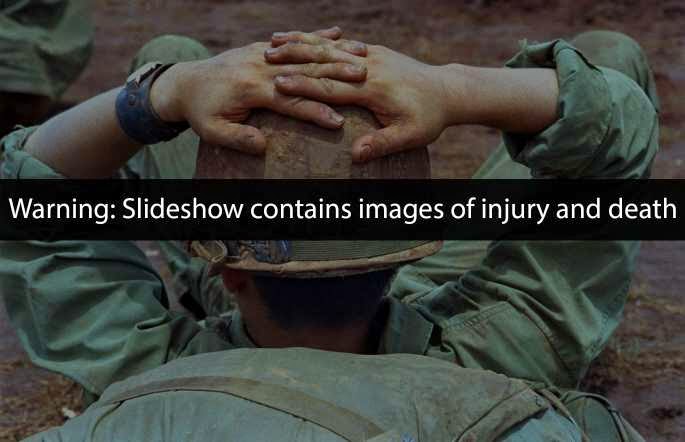 South Vietnamese troops, one with a bugle strapped to his pack, line up to board CH-21 “Flying Banana” helicopters on March 1963.

Buddhist monk Thich Quang Duc is doused with gasoline during a protest demonstration in Saigon on June 11, 1963. The monk then struck a match, set fire to his gas-soaked garments and died in protest of alleged government persecutions of Buddhists.

Flying at dawn, just over the jungle foliage, U.S. C-123 aircraft spray concentrated defoliant along power lines running between Saigon and Dalat in South Vietnam early in August of 1963. The planes were flying about 130 miles per hour over steep, hilly terrain, much of it believed to be infiltrated by the Viet Cong.

A contingent of the Royal Australian Air Force arrives at Tan Son Nhut Airport, Saigon to work with the South Vietnamese and U.S. Air Forces in transporting soldiers and supplies to combat areas in South Vietnam on August 10, 1964.

The sun breaks through the dense jungle foliage around the embattled town of Binh Gia, 40 miles east of Saigon, as South Vietnamese troops, apparently joined by U.S. advisers, rest after a cold, damp and tense night of waiting in an ambush position for a Viet Cong attack that didn't come. One hour later, as the possibility of an overnight attack by the Viet Cong disappeared, the troops moved out for another long, hot day hunting the elusive communist guerrillas in the jungle. Photo  taken in January of 1965.

Hovering U.S. Army helicopters pour machine gun fire into the tree line to cover the advance of South Vietnamese ground troops in an attack on a Viet Cong camp 18 miles north of Tay Ninh, northwest of Saigon near the Cambodian border, in March of 1965.

Marine Lance Corporal James C. Farley cries over the deaths of fellow soldiers during the Vietnam War on March 31, 1965.

An unidentified U.S. soldier wears a hand-lettered "War Is Hell" slogan on his helmet on June 18, 1965, during the Vietnam War. He was with the 173rd Airborne Brigade Battalion on defense duty at Phouc Vinh airstrip in South Vietnam.

Guitar slung over his shoulder, a trooper of the United States 1st Calvalry walks ashore from a landing craft at Qui Nhon, South Vietnam. More than 2,500 Cavalrymen arrived here on August 13, 1965, bringing the total of the Army's First Airmobile Division up to 16,000 men.

Paratroopers of the U.S. 2nd Battalion, 173rd Airborne Brigade hold their automatic weapons above water as they cross a river in the rain during a search for Viet Cong positions in the jungle area of Ben Cat, South Vietnam, on Sept. 25, 1965. The paratroopers had been searching the area for 12 days with no enemy contact.

Associated Press photographer Huynh Thanh My covers a Vietnamese battalion pinned down in a Mekong Delta rice paddy about a month before he was killed in combat on Oct. 10, 1965.
Thanh My was the elder brother of fellow AP photographer Nick Ut, and one of the 135 photographers from all sides who died in the French war in Indochina and the Vietnam War.

Near Berkeley, Calif., demonstrators march against the war in Vietnam during December of 1965.

U.S. soldiers hold a memorial service for seven men of the U.S. 101st Airborne Brigade in a clearing near a former French rubber plantation in Lai Khe, Vietnam, on December 17, 1965. The deceased men's boots, helmets and M16 rifles are set up with a field altar. The seven paratroopers were killed in action during a search-and-destroy mission against the Viet Cong in the jungles and plantation areas of Lai Khe, about 40 miles north of Saigon, during the Vietnam War.

Actress Carroll Baker snaps her fingers at sailors cheering from the bridge of aircraft carrier USS Ticonderoga as Bob Hope leads her across a stage set up on the flight deck. More than 2,500 sailors saw the Hope troupe's show on the carrier off the coast of Vietnam on December 27, 1965.

Farewell ceremonies in Danang on July 25, 1969 marking the departure of the colors of the units making up the 9th Marine regiment, which was being deployed to Okinawa under President Nixon’s 25,000 troop withdrawal plan.

Supporters of the Vietnam moratorium lie in the Sheep Meadow of New York's Central Park on Nov. 14, 1969, as hundreds of black and white balloons float skyward. A spokesman for the moratorium committee said the black balloons represented Americans who died in Vietnam under the Nixon administration, and the white balloons symbolized the number of Americans who would die if the war continued.

Mary Ann Vecchio gestures and screams as she kneels by the body of a student lying face down on the campus of Kent State University, Kent, Ohio on May 4, 1970. National Guardsmen had fired into a crowd of anti-war demonstrators, killing four.

South Vietnamese forces follow after terrified children, including 9-year-old Kim Phuc, center, as they run down Route 1 near Trang Bang after an aerial napalm attack on suspected Viet Cong hiding places on June 8, 1972. A South Vietnamese plane accidentally dropped its flaming napalm on South Vietnamese troops and civilians. The terrified girl had ripped off her burning clothes while fleeing.

Carriers and troops of B Company of the 7th Royal Australian Regiment during operations in Phuoc My province, southeast of Saigon on June 22, 1970. The operation involved a three-day search and clear mission, seeking out a Viet Cong base camp.

The four delegations sit at the table during the first signing ceremony of the agreement to end the Vietnam War at the Hotel Majestic in Paris on Jan. 27, 1973. Clockwise, from foreground, delegations of the Unites States, the Provisonal Revolutionary Government of South Vietnam, North Vietnam and South Vietnam.

An American prisoner of war talks through a barred door port to fellow POWs at a detention camp in Hanoi on March 14, 1973.

President Gerald Ford is photographed as he carries one of the first children evacuated from Vietnam during Operation Babylift at the San Francisco Airport on April 5, 1975.

Mobs of Vietnamese people scale the wall of the U.S. Embassy in Saigon, Vietnam, trying to get to the helicopter pickup zone, just before the end of the Vietnam War on April 29, 1975.

A CIA employee (probably O.B. Harnage) helps Vietnamese evacuees onto an Air America helicopter from the top of 22 Gia Long Street, a half mile from the U.S. Embassy on April 29, 1975.

A Provisional Revolutionary Government (PRG) tank enters the gates of the Presidential Palace in Saigon on May 1, 1975.