England lead West Indies by only 107 runs at 39-5 after 18 wickets fell on a dramatic second day of the final Test.
Resuming on 240-7, England added 17 with their remaining three wickets as fast bowler Jerome Taylor produced a spell of 3-3 to dismiss them for 257.
Anderson took 3-2 in five overs and finished with 6-42, his best overseas figures, as West Indies were 189 all out, despite Jermaine Blackwood's 85.
But batting again, England collapsed to leave the match tantalisingly poised. 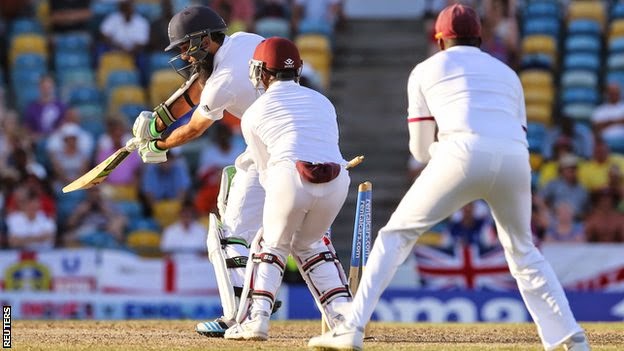 The figure of 18 wickets at the Kensington Oval in Barbados is a new record for the most in a day in the West Indies.
Such was the unusual nature of proceedings that Taylor, having ended the England innings with successive deliveries that uprooted the stumps, was back to attempt a hat-trick midway through the final session when the tourists batted again.
The pitch was far from the minefield England made it look, and their hesitant reply leaves a 1-0 series advantage in serious jeopardy.
"We've got some very positive batsmen to come and hopefully they can get us up to a defendable total," Anderson told BBC Sport.
"We want a decent lead, somewhere above 200 would be nice, that would give us a bit more of a cushion, but at the moment I don't think 107 is enough."
It had looked as though it would be a different story for Alastair Cook's team when Anderson produced a devastating spell of swing bowling.
He had Kraigg Brathwaite caught at third slip second ball while Alastair Cook, who had dropped Darren Bravo at first slip off Broad, pouched debutant Shai Hope for with a low catch confirmed by television replay.
And having bowled outswingers to Marlon Samuel, England's leading Test wicket-taker brought one back in to trap him lbw when no stroke was offered.
Moeen Ali dismissed Bravo in the first over after lunch but was dispatched for 14 in three balls by the aggressive Blackwood, who hit powerfully down the ground, with 11 fours and a four sixes in his fourth Test fifty.
There was plenty more loose bowling from England's occasional spinners, and a Root long hop was pummelled by Blackwood into the wrist of Gary Ballance, who had to leave the field, although he was fit to bat later in the day.
Anderson captured the final three wickets, Blackwood the last to fall, well caught by Moeen in the deep.
The absorbing nature of the contest continued, however, with Jonathan Trott out for his fifth single-figure score out of six in the series, lbw playing across the line again to Taylor.
As the Windies sensed the unease within the England ranks, Cook was caught at slip in the next over, Ian Bell succumbed to a second duck of the match and Joe Root edged to slip - all inside 15 overs.
Moeen attempted an injudicious cut shot to the slow left arm of Veerasammy Permaul in the penultimate over and got an inside edge on to his stumps in a frenetic finale.

Jordan's spectacular catch removed Bravo in the first over after lunch

The West Indies ended a chaotic day in the ascendancy
Nhãn: Sport