A+ A-
Print Email
A number of recent studies have reported on the use of biomarkers, particularly blood-based ones, that offer the potential for screening diseases such as cancer and HIV. 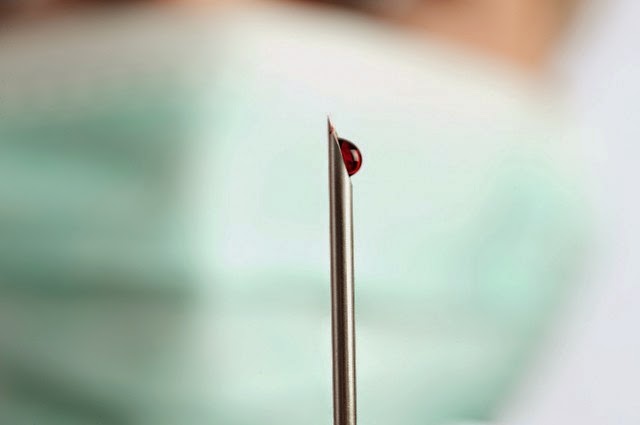 A biomarker can be a gene, a gene mutation, protein, other molecule or clinical measurement that indicates a given disease state. Biomarkers can be diagnostics (telling us of the presence of a given disease), prognostic (telling us of the outcome for a patient with a particular disease) and predictive (telling us of the response of an individual to a given therapy). The latter has led to the rise of so-called personalised or precision medicine.
Recent technologies developed since the sequencing of the human genome allow scientists to profile samples using a patient’s whole genome sequence, the expression of all of their genes, or by measuring thousands of proteins. Before this technology was developed, single biomarkers were often discovered by a chance observation, a hypothesis based on existing molecular knowledge or by laborious screening.

PSA for prostate cancer and the CA125 protein for ovarian cancer are two biomarkers currently used in this way. An elevated level of both of these in the blood is taken as a signal of early-stage cancer and CA125 was one of the markers actress Angelina Jolie Pitt used in her decision to remove her ovaries and fallopian tubes.
A recent study from University College London, published in the Journal of Clinical Oncology, showed that elevated levels of the protein CA125 in blood serum could diagnose advanced stages of ovarian cancer. The study examined more than 200,000 post-menopausal women and a computer program was then used to predict the risk of ovarian cancer based on factors including age, the original level of the protein and how that level changed over time.
The test was successful in diagnosing ovarian cancer in 86% of women with invasive epithelial ovarian cancer and was hailed as the most effective diagnostic tool for detecting cancer after the onset of symptoms, compared to the conventional CA125 blood test and trans-vaginal ultrasound, where the ovaries are scanned by ultrasound through the wall of the vagina. These findings are extremely promising and show the potential for using computer-based decision tools with multiple features.
Using Single Markers
One of the limitations of using older approaches such as laborious screening or hypotheses to discover biomarkers is that they may not be the best marker to use and there may be other markers in the patient’s profile which have greater accuracy, sensitivity and/or specificity (the ability to correctly predict positive cases and to also predict negative cases correctly). More than one marker in the blood? Ink by Shutterstock

Another limitation is that a single marker, while clinically appealing due to simplicity and low cost, may not capture the variability of disease through the population, which lowers accuracy, sensitivity and specificity.
This heterogeneity has been widely reported in breast cancer for example, where at least ten molecular subtypes of disease, each having different outcomes and treatments, have been hypothesised. Often scientists have sought to overcome the limitations of such tests by retrospectively adding further biomarkers to the existing test. Some tests, such as OncotypeDX for breast cancer, use post-genomic data, where thousands of genes and/or proteins are measured to produce a molecular profile of a sample to identify multiple markers and thus capture more of the variability of the disease.
In the future it is likely that through activities such as the 100,000 Genomes Project, and through molecular profiling projects, such as those being undertaken in the John van Geest Cancer Research Centre at Nottingham Trent University and other cancer research centres, more sophisticated multi-marker tests will be developed.
Molecular profiling generates a vast amount of highly complex data, with millions of potential biomarker variables – the analysis of which is not a trivial undertaking. In order to develop an optimised diagnostic test, this data needs to be analysed using appropriate computer algorithms (the work of bioinformaticians) to develop highly sensitive and specific diagnostic computer programs. Through this we will be able to integrate an optimum set of biomarkers into computer programs that aid in the clinical decision-making process. These programs can then be disseminated through the internet, leading to more widespread testing and validation.
The use of blood-based tests offers a great deal of potential for non-invasive screening. However any test has to be trialled prospectively in order to determine whether it truly screens all positive cases. There has been much debate on the over-treatment of cancers detected by screening – so-called false-positives, where cases test positive for disease when in fact no disease is present, leading to patients undergoing unnecessary and sometimes invasive treatments. This debate will be fuelled further by blood-based diagnostic biomarkers. The limitations of such processes need to be given careful consideration before widespread use.