When Rebekah Aversano’s brother was killed three years ago, she didn’t expect she’d ever get the chance to touch his face again. In a remarkable series of events that wouldn't have been out of place in the 1997 film Face/Off, Aversano saw her dead brother's face on another man. The emotional segment, which was filmed by 60 Minutes Australia, saw Rebekah meet Richard Norris—the man who received her dead brother’s face in a cutting-edge transplant surgery. 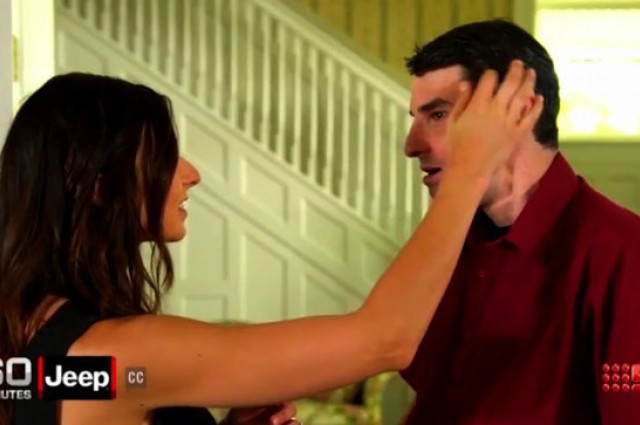 Richard Norris was disfigured in a shotgun accident 15 years ago, which caused him to lose his jaws, lips and nose. Norris became depressed and suicidal after a series of surgeries, which had limited success. "For the past 15 years I lived as a recluse hiding behind a surgical mask and doing most of my shopping at night when less people were around," Norris said in a statement.
Norris' life was changed, however, when Aversano and her family donated the face of her brother—Joshua. In an extraordinary and extremely complex 36-hour full face transplant, surgeons were able to replace his jaws, teeth, tongue, skin and underlying tissue, from scalp to neck.
“I am now able to walk past people and no one even gives me a second look. My friends have moved on with their lives, starting families and careers. I can now start working on the new life given back to me," Norris said.

Image credit: University of Maryland Medical Center.
During the emotional encounter, Aversano asks to touch Norris’ face and takes a step back, saying: “Wow, this is the face I grew up with.” Joshua’s mom, Gwen, said that donating his face was the right thing to do and that she can see her son's face in him.
“Some of the facial features would definitely be our son, so we could see similarities, very much so. We are just so pleased we have been able to help him. Even though we had such a tragic loss, we were able to give someone else the benefit of our son,” she told Canada’s CTV News network.
While the surgery has restored some sensation in his face and allowed him to smile and show expression, he’s unable to drink, smoke or get sunburned. Norris still has a lot of follow-up appointments with doctors and a therapist, and has to take a cocktail of anti-rejection drugs to ensure he’s healing properly.
You can watch the amazing encounter below.