100% Of Drinkers “Grand Until The Fresh Air Hits Them”

A+ A-
Print Email
PEOPLE who consume large amounts of alcohol are being advised to stay indoors during binges, after a recent study confirmed that leaving a pub or party and ‘hitting the fresh air’ is the main cause of drunkenness. 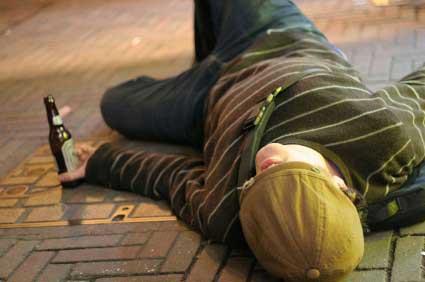 The study, which included a survey taken by thousands of hungover people, ascertained that 100% of drinkers are absolutely fine while imbibing gallons of alcoholic beverages, until mixing their drinks with fresh air causes them to black out.
A team of scientists has studied the effects of fresh air on a broad spectrum of drinkers, confirming that breathing in oxygen after a drinking session can cause high levels of falling around the place, possibly even more than a ‘bad pint’, the second leading cause of leglessness.
“The fresher the air, the worse it is for the drinker,” said Aidan Sabzwahri, chief statistician at the Irish Drunkeness Research Association.
“If you’re out on a heavy session, you’ll be fine until the fresh air catalyses with the alcohol in your bloodstream, causing a rapid acceleration of the effects of drinking. You can be at a party skulling shots all night and you’ll be as sober as a judge, but when you leave to go home and hit that fresh air, you’re fucked”.
The shocking revelations will come as some comfort to anyone currently dying from a hangover, as they will now be able to blame something other than themselves for getting so shitfaced.
Nhãn: Health-Science