14 rescued in Yangtze sinking, over 430 missing

A+ A-
Print Email
Fourteen people have been rescued and seven are confirmed dead more than 24 hours after a passenger ship carrying 456 people capsized in China's Yangtze River, navigation authorities said Tuesday. 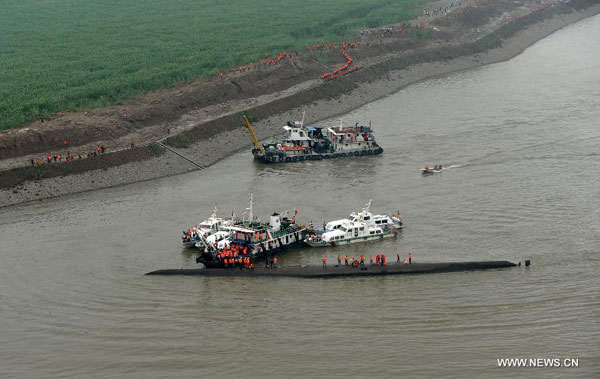 Rescuers said there could be more survivors in the upturned wreckage, but strong winds and heavy rain are hampering rescue efforts. More than 430 people are still missing.
The Eastern Star sank "within one or two minutes" of being caught in a tornado in Jianli, central Hubei Province, on Monday night, according to the ship's captain and chief engineer, who both survived the incident.
The Changjiang (Yangtze) River Administration of Navigational Affairs, under the Ministry of Transport, said that as of 9 p.m., 12 people had been rescued from the water, and another two were rescued from the wreckage.
Divers are combing the compartments for survivors, while the search on the river has expanded to 150 km downstream of the site and will continue to 220 km, said Li Jiang, vice head of the administration.
A team of 4,000, including police, fire fighters and soldiers from the Chinese Navy, are involved in the rescue mission.
Carrying mostly elderly tourists, the ship left the eastern Chinese city of Nanjing on May 28 for Chongqing Municipality on the upper reaches of China's longest river.
The Ministry of Transport said there were 456 people onboard, including 405 passengers, 46 crew and five tour guides.
Most of the passengers were from Shanghai and its neighboring province Jiangsu, aged between 3 and 83. The majority were in their 60s and 70s.
The ship's captain and chief engineer are in police custody.
RESCUE
Chinese President Xi Jinping has despatched a State Council work team to the site to guide the search and rescue work, and ordered all-out efforts.
Premier Li Keqiang, who is at the scene, has asked rescuers to seize every second, battle fatigue and challenge the extremes.
At about noon, A 65-year-old woman was able to swim out of the wreckage after divers gave her breathing apparatus.
A 21-year-old man was found trapped in a small compartment. He was also given diving apparatus and swam out by himself at about 3 p.m.
The Three Gorges Dam, located up-stream from the site of the accident, has limited water flow to counteract the rising water level caused by the persistent rain.
The divers said ongoing rescue efforts had been complicated by the intricate layout of the vessel, as well as adverse weather condition.
A 500-ton salvage vessel has arrived at the site, and another one of same size is scheduled to arrive Wednesday morning.
The 76.5-meter ship can carry up to 534 people. Tickets for the cruise cost from 1,098 yuan (177 U.S. dollars) to 2,298 yuan.
Passengers visit attractions during the daytime and return in the evening as the ship travels to the next port overnight. The agency arranging the tour marketed it toward senior citizens.
On Monday, the passengers visited Chibi (the Red Cliffs), a famous ancient battlefield. On Tuesday, the tourists were scheduled to visit Jingzhou City.