20 Awesome Science Experiments You Can Do Right Now At Home

A+ A-
Print Email
We can all agree that science is awesome. And you can bring that awesomeness into your very own home with these 20 safe DIY experiments you can do right now with ordinary household items. 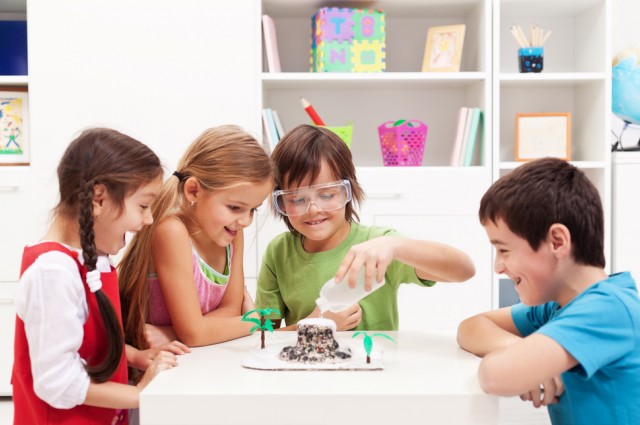 1. Make Objects Seemingly Disappear
Refraction is when light changes direction and speed as it passes from one object to another. Only visible objects reflect light. When two materials with similar reflective properties come into contact, light will pass through both materials at the same speed, rendering the other material invisible. Check out this video from BritLab on how to turn glass invisible using vegetable oil and pyrex glass.

2. Freeze Water Instantly
When purified water is cooled to just below freezing point, a quick nudge or an icecube placed in it is all it takes for the water to instantly freeze. You can finally have the power of Frozone from The Incredibles on a very small scale! Check out the video on this "cool" experiment.

3. Create Oobleck And Make It Dance To The Music
Named after a sticky substance in a children’s book by Dr Seuss, Oobleck is a non-Newtonian fluid, which means it can behave as both a solid and a liquid. And when placed on a sound source, the vibrations causes the mixture to gloopily dance. Check out these instructions from Housing A Forest on how to make this groovy fluid funk out in every way.

Gif from Science Sunday on Google+
4. Create Your Own Hybrid Rocket Engine
With a combination of a solid fuel source and a liquid oxidizer, hybrid rocket engines can propel themselves. And on a small scale, you can create your own hybrid rocket engine, using pasta, mouthwash and yeast. Sadly, it won’t propel much, but who said rocket science ain’t easy? Check out this video from NightHawkInLight on how to make this mini engine.

5. Create "Magic Mud"
Another non-Newtonian fluid here, this time from the humble potato. "Magic Mud" is actually starch found in potatoes. It’ll remain hard when handled but leave it alone and it turns into a liquid. Make your own “Magic Mud” with this video.

6. Command The Skies And Create A Cloud In A Bottle
Not quite a storm in a teacup, but it is a cloud in a bottle. Clouds up in the sky are formed when water vapor cools and condenses into visible water droplets. Create your own cloud in a bottle using a few household items with these wikiHow instructions.
7. Create An Underwater Magical World
First synthesized by Adolf van Baeyer in 1871, fluorescein is a non-toxic powder found in highlighter pens, and used by NASA to find shuttles that land in the sea. Create an underwater magical world with this video from NightHawkInLight.

Gif composed from video by YouTube user NightHawkInLight
8. Create A Gallium Masterpiece
Gallium has a low melting point of 29.7oC (85.5oF). By placing a lump of gallium into a warm glass of water, it becomes easily moldable into any shape. More instructions in this video.
9. Make Your Own Lava Lamp
Inside a lava lamp are colored bubbles of wax suspended in a clear or colorless liquid, which changes density when warmed by a heating element at the base, allowing them to rise and fall hypnotically. Create your own lava lamp with these video instructions.
10. Create Magnetic Fluid
A ferrofluid is a liquid that contains nanoscale particles of metal, which can become magnetized. And with oil, toner and a magnet, you can create your own ferrofluid and harness the power of magnetism!

Gif from Ramtco
11. Create Instant Ice Sculptures
Another "cool" experiment, this time using sodium acetate or ‘hot ice’. Found as a liquid in hand warmers, sodium acetate turns into hot ice when handled. Create your own instant ice sculptures with this video.

Gif composed from video by YouTube user HouseholdHacker.
12. Make Waterproof Sand
A hydrophobic substance is one that repels water. When sand is combined with a water-resistant chemical, it becomes hydrophobic. So when it comes into contact with water, the sand will remain dry and reusable. Make your own waterproof sand with this video.
13. Make Elephant's Toothpaste
Elephant’s toothpaste is a steaming foamy substance created by the rapid decomposition of hydrogen peroxide, which sort of resembles giant-sized toothpaste. Make your own elephant’s toothpaste with these instructions.

14. Make Crystal Bubbles
When the temperature falls below 0oC (32oF), it’s possible to freeze bubbles into crystals. No instructions needed here, just some bubble mix and chilly weather.
15. Make Moving Liquid Art
Mixing dish soap and milk together causes the surface tension of the milk to break down. Throw in different food colorings and create this trippy chemical reaction.

Gif composed from video by YouTube user HouseholdHacker.
16. Create Colourful Carnations
Flowers absorb water through their stems, and if that water has food coloring in it, the flowers will also absorb that color. Create some wonderfully colored flowers with these wikiHow instructions.
17. "Magically" Turn Water Into Wine
Turn water into wine with this video by experimenter Dave Hax. Because water has a higher density than wine, they can switch places. Amaze your friends with this fun science trick.
18. Release The Energy In Candy (Without Eating It)
Dropping a gummy bear into a test tube with potassium chlorate releases the chemical energy inside in an intense chemical reaction. That’s exactly what's happening when you eat candy, kids.

19. Make Water "Mysteriously" Disappear
Sodium polyacrylate is a super-absorbent polymer, capable of absorbing up to 300 times its own weight in water. Found in disposable diapers, you can make water disappear in seconds with this video.
20. Create A Rainbow In A Jar
Different liquids have different masses and different densities. For example, oil is less dense than water and will float on top of its surface. By combining liquids of different densities and adding food coloring, you can make an entire rainbow in a jar with this video.
There you have it – 20 experiments for you to explore the incredible world of science!
Nhãn: Health-Science, Video