6 Types of Fish That Cause Belly Fat 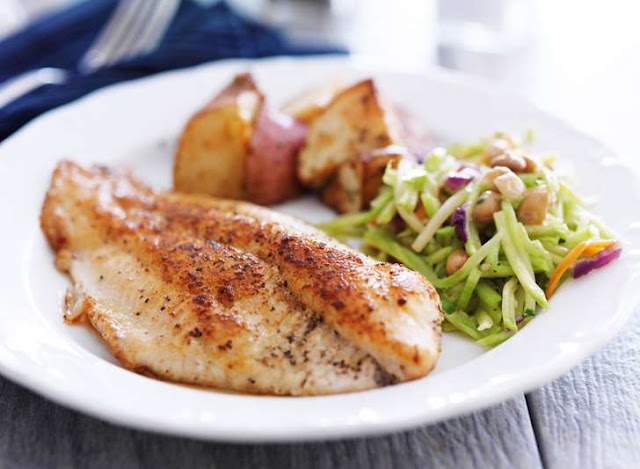 © Eat This, Not That!
When it comes to belly-slimming meals, there’s nothing healthier than a nice piece of fish, right?
Well, that may have been true 100 years ago when Teddy Roosevelt was wrestling wild salmon from the great rivers of the West. But while the sea creature that shows up in your supermarket or on your favorite restaurant menu today may look the same as what our forefathers subsisted on, in many cases it’s not. While the chicken of the sea can be an impeccable source of lean protein and heart-bolstering omega-3 fatty acids, certain varieties and preparations can bloat your belly faster than Ryan Lotche can swim the 300.

It’s all about context: Although wild salmon is high in fat, it actually burns blubber, thanks to its muscle-building protein and high amount of omega-3s, which regulate insulin and reduce appetite. The American Heart Association recommends eating fish that are high in omega-3s twice a week. But just as not all fat is bad, not all seafood is healthy. In fact, these options qualify as worse than junk food.

© Provided by Eat This Not That atlantic salmon
Atlantic salmon is the Kid Rock album release of the refrigerator section: Always bad news. Although wild salmon is high in omega-3 acids, which fight inflammation throughout the body, farm-raised salmon (all Atlantic salmon is farm-raised) is packed with omega-6s, which actually increase it. Because salmon farmers feed their fish soy, wild salmon has just 114 mg of omega-6s while farmed salmon has around 1,900 mg. Not to mention that farmed salmon are usually dyed pink, and have been found to be high in PCBs and have one-fourth the belly-flattening vitamin D of their wild cousins.
2. Tilapia

© Provided by Eat This Not That tilapia fillet With its astronomical level of omega-6s, this fish is worse for your belly than bacon; a serving is more inflammatory than a burger or a donut. Additionally, most tilapia is farm-raised and fed a diet of corn instead of lake plants and algae, making them the turducken of seafood: Junk stuffed with junk surrounded by junk.

© Provided by Eat This Not That swordfish steak
These two varieties of fish contain dangerously high levels of mercury, which acts as an endocrine disruptor: A fake hormone that tricks your body into holding on to fat, burning fewer calories, and reducing levels of leptin, a hormone that regulates appetite. Tilefish has the highest mercury level among all varieties of fish, with 1.45 parts of mercury per million (or 45% higher than the USDA allowed maximum). Swordfish is the runner-up, with .995. Similarly, you should always paddle away from shark, king mackerel and orange roughy. As a general rule, the smaller the fish, the lower its level of contaminants. Sardines, scallops, and other pocket-sized sea creatures are among the lowest in mercury, according to FDA data.
4. Spicy Tuna Rolls

© Provided by Eat This Not That spicy tuna rolls Tuna is super-lean, and spices torch fat, so combining the two in sushi should be a win-win, right? Uh, no: The tuna is chopped up and bound with globs of mayonnaise, adding 290 calories and 11 grams of fat per roll. (The white-rice wrappers will do your belly fat no favors either.) Other rolls to watch out for: anything called the Philadelphia Roll, which is cream cheese, salmon and white rice (in addition to sounding disgusting, it’s basically a bagel on chopsticks) and the California Roll, which can ring in at 520 calories and almost 20 grams of fat. As a general rule, stick with salmon and tuna sashimi, which offers around 40 calories, 7 grams of protein and all good fats per piece. Supplement with brown rice and nosh on the ginger that’s often served on the side: It’s a metabolism booster.

© Provided by Eat This Not That shrimp tempura Don’t be tempted by this nutritional Mata Hari: Its exotic countenance conceals that it’s essentially french-fried sushi, or fish-and-chips without the chips. Battered with white flour and bathed in hot oil, tempura’s most common base is shrimp, although there are also healthy-sounding options like eggplant and squash. If you want to flatten your belly, avoid them all. A shrimp tempura roll can clock in at 508 calories and 21 grams of fat—nearly as much as a Big Mac. Meanwhile, the vegetable tempura at the Ra Sushi chain has an eye-popping 1,500 calories and 103 grams of fat. If you must indulge, know what’s inside the crispy coating: Certain varieties include whitefish and skate, high-toxin fish that are worth throwing back immediately.
6. Most Fish Dishes at Chain Restaurants

© Provided by Eat This Not That fish and chips That might sound like hyperbole, but it’s not by much. The cardinal rule is that if it’s not a simple grilled fillet, skip it. Applebee’s New England Fish & Chips packs the 1,970 calories and 136 grams of fat, while PF Chang’s Kung Pao Scallops has 870 calories and 50 grams of fat. Even healthy-sounding options can be prepared with butter and sauces that drive up the bad stuff: Applebee’s Baked Haddock has 810 calories and 32g of fat. You’d be better off eating two McDonalds’ Filet-o-Fish. But really, don’t do that. A twist of lemon and pepper is all you need to bring out the savory creaminess of salmon, and very little beats the clean energy that tuna sashimi provides.
Nhãn: Health-Science