A+ A-
Print Email
The head of al Qaeda's Syria wing Nusra Front said he saw no solution soon to a conflict with the rival Islamic State group in Syria that has killed hundreds of fighters, according to an interview with Al Jazeera aired on Wednesday 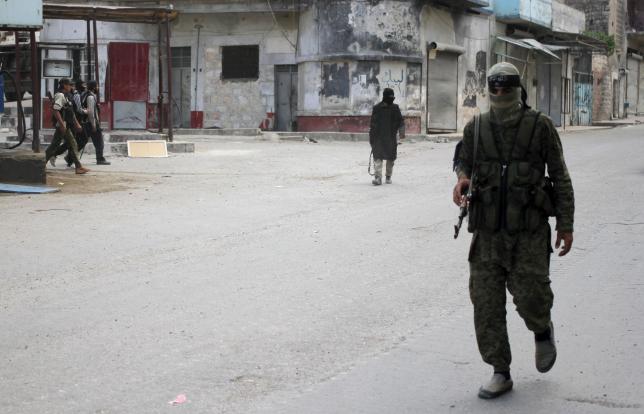 Members of al Qaeda's Nusra Front walk along a street in the northwestern city of Ariha.


Nusra Front, loyal to the successors of Osama bin Laden, and Islamic State are the two most powerful forces fighting government forces in Syria. The groups have fought each other since a split in 2013 largely due to a power struggle between leaders.


"There is no solution between us and them in the meantime, or in the foreseeable future. We hope they repent to God and return to their senses...if not then there is nothing but fighting between us," Abu Mohamad al-Golani told the channel. It was not clear where or when the rare interview took place.
It was the second of a two-part interview and included footage of a Nusra training camp, weaponry, a lesson inside a classroom as well as images of a prison and a food packing operation inside Nusra-held territory.
The group has made gains in northwestern Syria alongside other insurgent groups in recent weeks, seizing the city of Idlib, the town of Jisr al-Shughour and bringing armed groups closer to government-held coastal areas north of the capital.
Golani said his Sunni Muslim militant group had around 30 percent foreign fighters including "a small number" of Americans. The foreign contingent also included Europeans and many Asians, Russians and Chechens, he said.
The two-part interview on the Qatari-financed channel appeared to be an attempt by Nusra Front to cast itself to an Arab audience as a Syrian national movement.
Iran
This has triggered debate among Western diplomats following Syria's conflict who still see it as a dangerous, hardline group that is not clearly distinguishable from Islamic State.
In last week's instalment Golani had made clear he took orders from al Qaeda chief Ayman al-Zawahiri, who had told him to focus Nusra's fight on Syria. This week he evaded a question about whether Nusra was thinking of splitting from al Qaeda.
Nusra follows al Qaeda's hardline interpretation of Islam and sees Shi'ite Muslim power Iran as a major foe. Golani said Iran, which backs Syrian President Bashar al-Assad, was using only militias to fight jihadists in Syria.
He said Tehran had also sent military experts but not its national troops to Syria and said Nusra was determined to fight Iranian-backed groups.
"We will cut off the arms of Iran in our region, and as for Iran, it will be handled by those (inside it)," he said, alluding to possible revolt by minority Sunnis and Kurds.
Syria's United Nations envoy said last week the interview violated U.N. counterterrorism resolutions and was an attempt by Qatar to whitewash the group's image. The channel has not responded to requests for comment.