A+ A-
Print Email
POTENTIAL car-buyer Martin Holmes said he wasn’t too sure the reason behind kicking the car front tyre just there, after being shown the vehicle by its current owner.
The 43-year-old told WWN he only realised that he had kicked the tyre after it was too late. 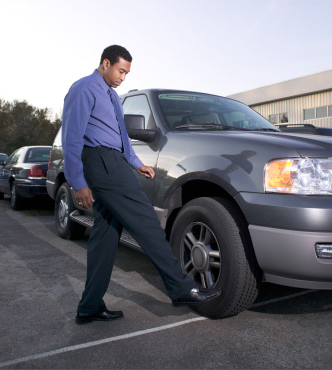 “I have no idea why I just did that.” said the father of children. “What was I even checking for? I mean, it wasn’t even a hard kick that would have shown me anything in particular about the cars current condition!”
Mr. Holmes discovered the Ford people carrier on buy and sell website Done Deal earlier this week, before deciding to contact the owner for a viewing today.
“I imagined that I would just go up there and give it a test drive or something. Maybe check under the hood and pretend I knew what the hell I was doing.” he said. “I never thought I’d give the game away by just kicking the tyre like some sort of idiot. ”
The part-time florist doesn’t know if he will now make an offer on the car as he thinks his whole ‘macho male haggling thing’ has been ruined.
“I caught the owner shaking his head after I did it. I think the best thing to do now is just go home and forget about this whole terrible encounter.” he concluded.
Nhãn: Lifestyle