A+ A-
Print Email
Oscar winner Eddie Redmayne will star in Harry Potter spin-off film Fantastic Beasts and Where to Find Them, Warner Bros has officially confirmed. 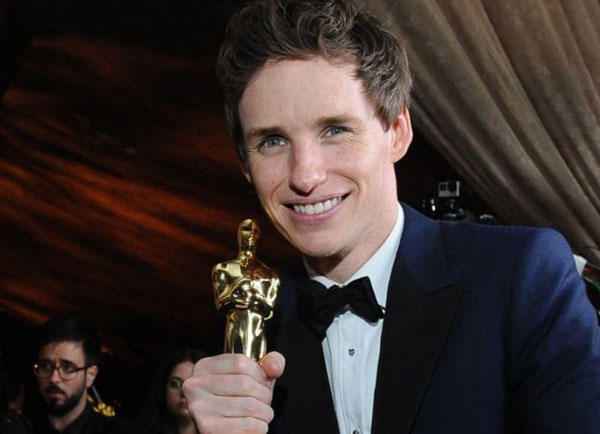 He will play pre-eminent Wizarding World magizoologist, Newt Scamander, who writes the famous Hogwarts School textbook that gives the film its title.
Potter author JK Rowling is making her screenwriting debut on the film.
The film's director David Yates said: "Eddie is a fearless actor, brimming with invention, wit and humanity."
He added: "I couldn't be more excited about the prospect of working with him as we start this new adventure in JK Rowling's wonderful world, and I know she feels the same way."
Rowling's Fantastic Beasts book, which was published in 2001, is set 70 years before the events of her bestselling Potter series.
It follows the adventures of magizoologist Scamander - a specialist in magical animals - who travels the Wizarding World to document the beasts he encounters.
He writes a book - Fantastic Beasts and Where to Find Them - which is then studied years later by Hogwarts students such as Harry, Ron and Hermoine.
Director Yates previously directed the final four Potter films, while producer David Heyman - who worked on all eight of the blockbusters - will produce the film.
Greg Silverman from Warner Bros Pictures said they were "thrilled" to have cast Redmayne - who had been widely rumoured to take the part - calling him "one of today's most extraordinarily talented and acclaimed actors".
Earlier this year he won the best actor Oscar, a Bafta, a Golden Globe and a Screen Actors Guild award for his performance as Stephen Hawking in biopic The Theory of Everything.
Fantastic Beasts and Where to Find Them is expected to be released in 3D and Imax worldwide on 18 November 2016.
Writing on her Facebook page in 2013, JK Rowling said: "Although it will be set in the worldwide community of witches and wizards where I was so happy for 17 years, Fantastic Beasts and Where to Find Them is neither a prequel nor a sequel to the Harry Potter series, but an extension of the wizarding world.
"The laws and customs of the hidden magical society will be familiar to anyone who has read the Harry Potter books or seen the films, but Newt's story will start in New York, 70 years before Harry's gets under way."