A+ A-
Print Email
Sinai Province, Islamic State's Egypt affiliate, fired rockets late Tuesday at the direction of an airport in the Sinai peninsula used by multinational peacekeeping forces, security sources said, adding that there were no casualties reported. 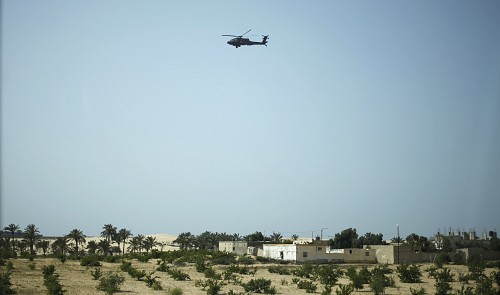 The group claimed responsibility for the attack on several Twitter accounts linked to it.
Details of the attack, however, could not be immediately confirmed with some security sources saying the rockets fell inside the airport and others saying they fell outside.
Sinai is where multinational peacekeepers known as the Multinational Force & Observers (MFO) are based. The MFO was created as a result of the 1979 peace treaty between Egypt and Israel.
Egypt's government faces an Islamist insurgency based in Sinai and growing discontent with what critics perceive as heavy-handed security tactics.
Tweets from Twitter accounts linked to Sinai Province claimed responsibility for the attack on Tuesday night, saying it came in response to the police arresting a local woman.
Ansar Bayt al-Maqdis, Egypt's most active militant group, changed its name to Sinai Province last year after swearing allegiance to Islamic State, the hardline Sunni militant group that has seized swaths of Iraq and Syria, drawing U.S.-led airstrikes.
Sinai Province had so far focused its bombing and shooting attacks on members of Egypt's security forces, who mounted the country's toughest crackdown on Islamists after the military removed President Mohamed Mursi of the Muslim Brotherhood from power following mass protests against his rule.
The group also released a recording in May urging attacks against members of the judiciary. The recording surfaced days after a court's decision to seek the death penalty for Mursi and followed the state's execution of six members of Sinai Province for an attack on soldiers in Cairo last year.