Fifa's Sepp Blatter 'under investigation in US'

A+ A-
Print Email
Fifa president Sepp Blatter is being investigated by US officials as part of their inquiry into corruption at the world football body, US media say. 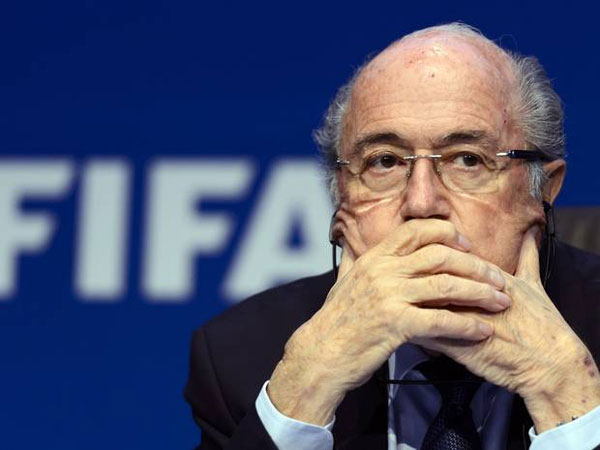 The news came hours after Mr Blatter announced that he was stepping down from his role.
US prosecutors launched a criminal inquiry last week, with seven Fifa officials arrested in Switzerland, part of a group of 14 people indicted.
Two days after the arrests, Mr Blatter was re-elected president of Fifa.
However, he said on Tuesday that it appeared the mandate he had been given "does not seem to be supported by everyone in the world".
Mr Blatter said: "Fifa needs profound restructuring."
'Bribes and kickbacks'
US officials quoted in the New York Times said they hoped to gain the co-operation of some of the Fifa figures now under indictment on charges of racketeering and money laundering to try to build a case against Mr Blatter.
Earlier the FBI, Internal Revenue Service and the US Attorney for the Eastern District of New York, who is involved in the US prosecutions, all said they would not comment on the Blatter resignation.
In its prosecution, the US justice department said 14 individuals were under investigation worldwide for allegedly accepting bribes and kickbacks estimated at more than $150m (£97m) over a 24-year period.
Two vice-presidents were among the seven Fifa officials arrested in Zurich. They all await US extradition proceedings.
Brazilian footballing legend Pele told the BBC that the developments surrounding Fifa and Sepp Blatter "surprised everyone".
"My position is like a player. I want to see football put people together, stop the war," he said.
"Fifa needs honest people."
The arrests overshadowed the vote for a new president, which Mr Blatter won, defeating his sole challenger, Prince Ali bin Al Hussein of Jordan.
Prince Ali withdrew despite forcing a second round, having lost the first by 133 votes to 73.
Announcing his exit on Tuesday, 79-year-old Mr Blatter called an extraordinary Fifa congress "as soon as possible" to elect a new president.
The Swiss, who has been Fifa president since 1998, said: "The next ordinary Fifa congress will take place on 13 May, 2016 in Mexico City.
"This would create unnecessary delay and I will urge the executive committee to organise an extraordinary congress for the election of my successor at the earliest opportunity.
"This will need to be done in line with Fifa's statutes and we must allow enough time for the best candidates to present themselves and to campaign."
The extraordinary congress is expected to take place between December 2015 and March 2016.
Further allegations of corruption emerged on Tuesday with claims that Fifa general secretary Jerome Valcke was linked to an alleged $10m (£6m) payment of bribes over South Africa's bid to host the 2010 World Cup. He denies any wrongdoing.
A separate criminal investigation by Swiss authorities into how the 2018 and 2022 World Cups were allocated is also under way.