A+ A-
Print Email
THE internet has gone crazy following the official announcement that media maven and selfie queen Kim Kardashian’s as yet unborn child will release an autobiography this coming July.
Speaking to fans via the video streaming app Periscope, Kardashian told her followers while in the middle of an ultrasound that her upcoming son or daughter would delight fans with tales of what it is like to be in the womb belonging to one of the most famous people in the world. 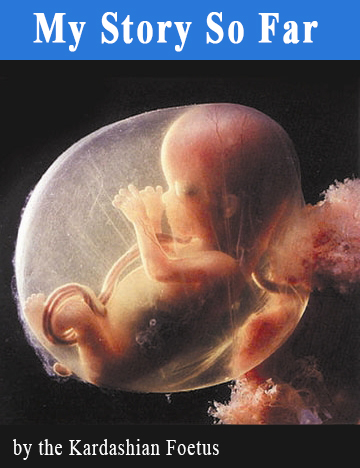 It is believed publishing company Rizzoli, who published Kim’s selfie collection, have inked a 7-figure deal to take the autobiography to the world’s book shelves.
“I’m so happy to share this with you guys, and I’m really excited about hearing what he or she tear down the haters and all those people who have already written lies about him or her,” Kardashian said in her Periscope address.
Kim and her publishers have enlisted a ghost writer for the project as well as an expert in the field of ‘womb communication’ who is expected to make contact with the unborn child in an effort to help shape what is sure to be a thrilling story.
“I mean c’mon, being the unborn child of Kanye West and Kim Kardashian – it’s so intriguing, where is their head at right now? What are they thinking about?” Ezra Lebenbaum, head of future publishing at Rizzoli told WWN.
The ever growing foetus is expected to be at the official press launch of the book later this month ahead of the book’s 4th of July release date.
Nhãn: Entertainment