Man Reading The Irish Times On LUAS Hopes Somebody Notices

A+ A-
Print Email
OBVIOUSLY intelligent man Niall Ahern spent much of his early morning commute to Dublin city centre on the LUAS with his copy of the Irish Times on display for anyone who cared to presume he was superior to them for reading it.
Mr. Ahern was travelling into town on the LUAS at 7.35am but didn’t let the early hour deter him from catching up on the most important news from here and abroad. 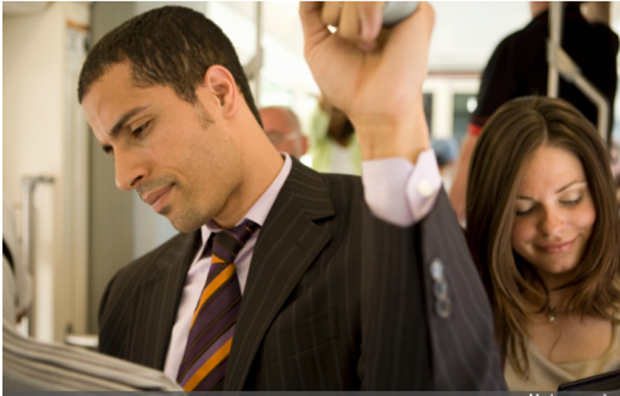 “Could I just download the app on my phone? Yeah, of course, but then who would know I was reading the Irish Times? I gave the phone a trial run before, but people found me a bit weird for laughing and saying ‘Oh, classic Irish Times’ just to let them know that’s what I was reading – so I reverted to the cumbersome broadsheet,” Ahern revealed exclusively to WWN.
Despite the cramped space on the LUAS, Ahern made sure to secure a seat and airspace for his copy of the Irish Times. The 31-year-old solicitor made sure to nod along and smirk sarcastically as his eyes scanned the pages of the newspaper.
“It’s not enough any more to just read it, I have to make a song and dance about flicking through the pages, a particularly loud tut is always good,” explained Ahern.
Ahern went on to reveal that when he looks up from the paper, appearing to contemplate the complex ideas put forward in the opinion pages, he is really just checking to see if anyone is staring at him in awe.
“Now, it’s around Ranelagh I sometimes find myself nodding off because the news is boring as fuck in fairness, so I sometimes pinch myself, or if there’s no helping it I use the paper to hide behind and just enjoy a quick nap”.
It didn’t take Ahern’s fellow passengers long to come to admire the 31-year-old’s intimidating intellect.
“It was a bit annoying at first to be honest, his elbows were jutting out and over on my seat, I had page 5 stuffed in my face and started to feel shit about the fact I couldn’t pick out Syria on a map and here was this lad reading about it,” explained irritated commuter Paul MacAuley.
“But I suppose it wasn’t all that bad when he got to the page with the cartoons on it and then the sport. I started giving that a read and then went back to watching videos on my phone”.
Before disembarking at Stephen’s Green, Ahern almost ruined the illusion by mistakenly flicking to the last few pages of the paper which included the weather and some other shite which no one ever reads.
Nhãn: Lifestyle