Man Spends Evening “Hate-Cleaning” The House After Row With Girlfriend

A+ A-
Print Email
A DUBLIN man yesterday spent the majority of his Sunday tidying his apartment while in a huff, after a disagreement with his girlfriend, which saw the two abandon plans they had made for the afternoon.
This marks the latest recorded incident of a new phenomenon known as “hate-cleaning”, in which one or more parties in a relationship engage in acts of home maintenance in an attempt to show the other just how annoyed they are. 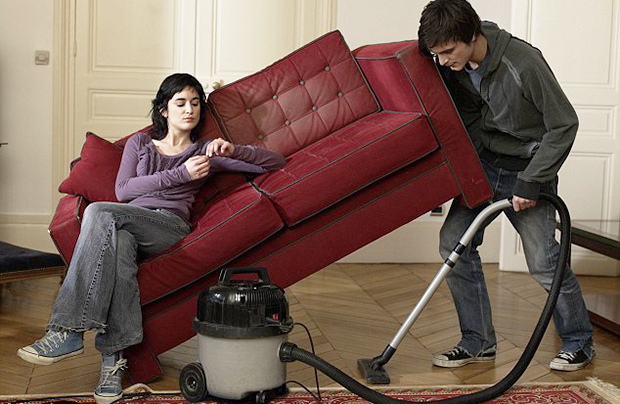 Mark Callan, 33, had made plans with his girlfriend, 25 year-old Shauna Wright, to go to their local bar on Sunday afternoon for a few pints and maybe a panini or something. However, these plans fell asunder after an argument which began when Wright suggested that she was ‘bored’ with going to the same pub every weekend.
Callan, who doesn’t normally volunteer for household chores, went into a sulk and stated that if they weren’t going out, then he was going to clean the two bedroom apartment the pair share. He then began to furiously hoover the living room before setting about cleaning the upstairs bathroom, while Wright watched TV and pretended to ignore him.
“We’re seeing a lot of hate-cleaning these days,” said relationship expert Maura Hynes, author of the book “Don’t Clean That In Anger”.
“Usually from the men, they’ll try to prove how much you’re ruining their fun by setting about tasks which they normally wouldn’t do. It’s a primitive way of saying, ‘you won’t let me do what I want, so I’ll just do the cleaning to prove how much you’ve ruined my day'”.
Hynes went on to suggest that should a man fly into a bout of hate-cleaning, it’s best just to let him get it out of his system, stating that if nothing else the house will be spotless by the time he cops himself on.
Nhãn: Lifestyle