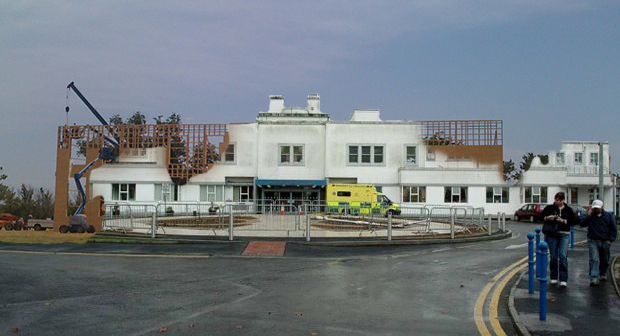 THERE was widespread condemnation of the HSE yesterday after a shocking investigation into the Midlands Regional Hospital revealed that the facility is nothing but a facade made from plywood screwed to a huge scaffolding.
The damning independent report comes after a number of investigations by HIQA, the body set up by the HSE to investigate itself, all of which found the MRH to be “grand”.


The hospital, located in Portlaoise, has come under fire in recent months following a number of tragic cases arising from its maternity wing, as well as chronic overcrowding and waiting times. The latest report from HIQA stated that while the hospital was “absolutely fine”, they would be outsourcing complex surgery procedures to other, already under-staffed units around the country.
This prompted an independent inquiry, which revealed that the Midlands Regional Hospital has been nothing but an elaborate set for quite some time, with sick and elderly people just sort of hanging around outside.
“There’s shop mannequins dressed up as doctors and nurses standing in the windows,” said independent investigator Hannah Chambers, pointing at the glassless windows of the huge fake building as it swayed in the wind.
“It looks convincing enough from the road, but when you turn to go round the back, there’s just nothing. I spoke to several people who were waiting in the “A&E” department, which is just a three rows of chairs in front of a window”.
“They were assured they would be seen by a member of staff, but when I snuck round the back I found a cardboard cut-out of a nurse going round a train track, which would play a “someone will see you soon” recording as it passed the window. Most people just go home after two days, so nobody ever found out the truth”.
Minister for health Leo Varadkar has so far refused to comment on the matter, but sources close to him say he is doing his best to hold out on the matter until everyone gets distracted by some other news, such as a tsunami that kills thousands in the Pacific, or maybe a new U2 tour.