A+ A-
Print Email
The oil tanker that was hijacked off the south-east coast of Malaysia last week has been detected in Cambodian waters, according to local media reports on Thursday. 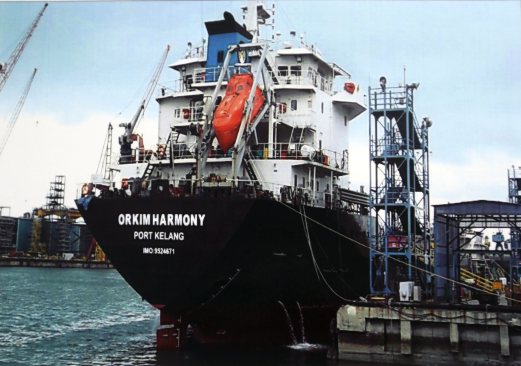 The MT Orkim Harmony which was hijacked off the south-east coast of Malaysia last week. File photo

State news agency Bernama, quoting Malaysia’s Chief of Navy Admiral Abdul Aziz Jaafar, reported that the MT Orkim Harmony has been repainted and renamed.
“We have found the vessel and RMAF, MMEA and RAAF aircraft are tailing it from the air,” Jaafar told Bernama, referring to the Malaysian air force and maritime enforcement agency, and the Royal Australian Air Force.


The New Straits Times reported that a senior navy official who was directly involved in the search efforts said the lead was following a sighting of the ship by an Australian aircraft.
A spokesperson from the maritime enforcement agency declined to confirm the news reports. The agency will hold a press briefing later on Thursday.
The 7,300 deadweight tonne (DWT) Orkim Harmony was hijacked on June 11 about 30 nautical miles from the Johor port of Tanjung Sedili, carrying around 50,000 barrels of RON95 gasoline, in the second such incident in the same area this month.
The two hijackings have raised further concerns over piracy in South-east Asia, maritime officials said on Monday.
Malaysian state oil firm Petronas told Reuters that the Harmony was carrying 6,000 metric tonnes of product from its Malacca refinery to Kuantan for distribution. It said “all necessary measures are being taken to ensure undisrupted fuel supply to consumers in the East Coast region.”
Earlier this month, the 7,100 DWT oil tanker Orkim Victory carrying diesel loaded from Petronas was hijacked on June 4 in the same area and on the same route.
The Orkim Harmony is operated by Malaysia’s Orkim Ship Management. On board is a crew of 22 consisting of 16 Malaysians, five Indonesians and one Myanmar national.
Vice-Admiral Ahmad Puzi, the maritime enforcement agency’s deputy director general of the operations unit, told reporters on Monday that it would be difficult for the pirates to siphon off the gasoline from the Harmony as it was highly flammable and that they were likely looking for the proper facilities to do a ship-to-ship transfer.