A+ A-
Print Email
A group of scientists and economists is calling for the equivalent of the Apollo Space programme to produce cheap, clean energy. 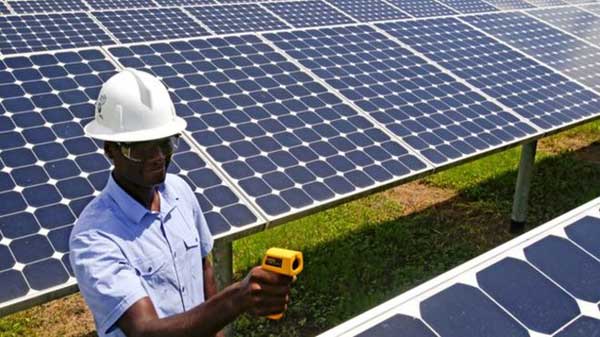 Apollo engaged America’s best minds to put a man on the Moon in the Cold War.

The academics say a similar effort is needed to make renewables cheaper than coal within a decade in what they call the biggest scientific challenge of the century.
Such a project has been mooted in the past – but always failed.


The groups of experts call their project Global Apollo. They say they have generated interest from major nations in their plan for an investment of 0.02% of their GDP into research, development and demonstration (RD&D) of clean electricity.
Their report, launched at London’s Royal Society, says on current projections the world will exceed the 2C danger threshold of climate change by 2035.
The academics are led by the UK’s former chief scientist Professor Sir David King. He told BBC News: “We have already discovered enough fossil fuels to wreck the climate many times over. There’s only one thing that’s going to stop us burning it – and that’s if renewables become cheaper than fossil fuels.
“Under our plan we are aiming to make that happen globally within a decade.”
21st Century challenge
Another of the authors, former Cabinet Secretary Lord O'Donnell, told BBC News: "People never believed we could put a man on the Moon - but we did. People don't believe we can solve climate change - but we have no choice."
The report says: “We are talking about a crisis more serious than most major wars. This is the biggest scientific challenge of the 21st century. Let us show we have the collective intelligence to understand and overcome the danger that faces us.”
It complains that renewable energy has been starved of investment to a shocking degree, with publicly-funded RD&D on renewable energy only $6 billion a year – under 2% of the total of publicly funded research and development.
The authors say this compares poorly with the $101 billion spent worldwide on production subsidies for renewables and the $550bn “counter-productive” subsidies for fossil fuel energy.
They say further renewables subsidies are essential to create mass markets and lower the cost – but they want to divert some of the subsidies into technical research.
So their report proposes asking governments to spend 0.02% of their GDP on internationally co-operative RD&D in renewables; energy storage and smart transmission. They believe co-ordinating the research to save wasted effort is one of the most important features of the programme.
Solar is the most favoured renewable source as the group say it has greatest potential for technology breakthroughs, and most new energy demand will be in sunny countries.
The cost of solar has been plummeting and is already approaching competitive prices in places as different as Germany, California and Chile. But the authors believe next generation plastic photovoltaics can to keep prices tumbling.
Place in storage
They believe battery technology is improving fast – but think batteries and other forms of storage need to be massively developed to store intermittent renewable energy. The authors say much smarter software is needed to enable electricity grids to cope with the new sources of power.
Some experts believe that energy technology has developed so fast that it simply needs further price support to keep volumes rising and costs falling. Others will complain that the Apollo group have done little to tackle the immense problem of replacing fossil fuels in heating.
The research programme is likely to be supported by many mainstream thinkers and climate "sceptics" alike. The Danish academic Bjorn Lomborg said: "We need to speed up green energy research so that renewable energy becomes the cheapest, most effective way of producing electricity - and we still have a long way to go."
But he said the first priority was to end current subsidies to fossil fuels.
Friends of the Earth campaigner Alasdair Cameron said: "An Apollo-style clean power programme is certainly exciting - but renewables are already a rocketing success and are rapidly becoming some of our cheapest sources of energy.
"The best way to boost the development of renewable energy is for the [UK] government to make sure we keep installing it, while investing in more research - not by abandoning onshore wind, already one of the cheapest clean energy sources and getting cheaper."
Dr King said the idea was being discussed in the G7. He said participating countries will be announced at the G20 in Turkey, ahead of the Paris climate summit in December.
Source: BBC
Nhãn: World-Region