More than 6,400 killed amid 'tremendous hardship' in Ukraine: UN

A+ A-
Print Email
The United Nations said Monday that more than 6,400 people had been killed in conflict-wracked Ukraine, and despite a slowdown in fighting, millions more are suffering from abuses and hardship. 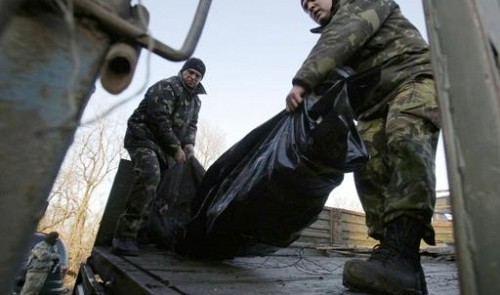 The conflict between pro-Russian rebels and government troops in eastern Ukraine has claimed more than 6,417 lives.

In its latest report, the UN human rights office noted that an overall decrease in indiscriminate shelling since a fragile truce was agreed in Minsk in February had resulted in a decrease in civilian casualties.


But nonetheless, at least 6,417 people perished from the beginning of the conflict in mid-April 2014 through May 30, 2015, including at least 626 women and girls, while another 15,962 had been wounded, it said.
"This is a conservative estimate and the actual numbers could be considerably higher," the rights office said in a statement.
Some five million others are meanwhile suffering the consequences of the conflict, including 1.2 million people who have been displaced inside the war-ravaged country, the report said.
"Even with the decrease in hostilities, civilians continue to be killed and wounded," UN High Commissioner for Human Rights Zeid Ra'ad Al Hussein said.
"We have documented alarming reports of summary executions by armed groups and are looking into similar allegations against Ukrainian armed forces," he said, also decrying "horrific accounts of torture and ill-treatment in detention" by both sides.
Civilians in the areas under the control of armed groups are facing "serious rights abuses", including "killings, torture and ill-treatment", as well as detention, "forced labour, looting, ransom demands and extortion," the report said.
The latest report, which covers the period from February 16 to May 15 this year stressed that the shelling had not stopped altogether.
Combat between Ukrainian troops and pro-Russian armed groups was also continuing, and civilians were still dying from landmines and unexploded ordnance, it said.
"While some areas in the conflict zone have remained calm, such as the city of Lugansk, others have become the scenes of escalating hostilities since April 11," it said.
The area around the airport in rebel stronghold Donetsk and in the contested village of Shyrokyne, near the strategic port city of Mariupol, remained "major flashpoints" where heavy weapons were being used "intensively".
The human rights office also cited reports that Russia was continuing to send heavy weaponry and foreign fighters into the conflict-hit areas, a claim Moscow denies.
"The withdrawal of foreign fighters and the cessation of the flow of weapons from the Russian Federation would have a significant impact on law and order and the implementation of other provisions of the Minsk Agreements," the report said.