Muscle Engineered To Respond To Light 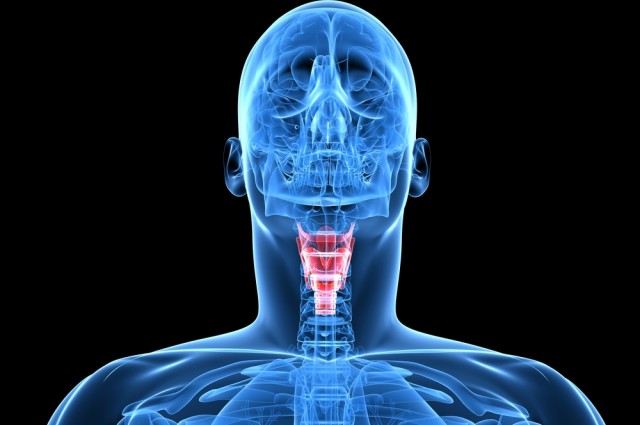 Muscle that has been genetically engineered to contract when flashed with light could be used to help patients with paralysis, a new study suggests. Scientists have been able to introduce a gene for a light-sensing protein into the muscles of a mouse’s larynx and successfully stimulate it with pulses of light.
Known as “optogenetics,” the technique makes cells that would ordinarily respond to electrical signals respond instead to light. The team behind this new study, published in Nature Communications, had already shown that heart muscle can be engineered to contract when hit by light, but this is the first time that they’ve been able to achieve the same with skeletal muscles, which is normally moved under conscious command.

“Depending on where we point the light beam, we can also stimulate individual muscle groups—exactly the same way the body does it through the nerves," explained Dr. Tobias Bruegmann, the lead author of the study.
For their experiment, the researchers used the genes that code for a family of proteins called channelrhodopsins, originally discovered in blue-green algae. As the name suggests, the protein produced forms a channel in the membrane of the cell. When stimulated by light, the channel opens up and sets off a biochemical pathway that ultimately allows the algae to move either towards or away from light.

The mouse larynx opening and closing in response to light. GIF composed from YouTube video by NPG Press
The team, from the University of Bonn, Germany, produced transgenic mice that expressed the specific channelrhodopsin in their larynx. They were then able to stimulate the muscles to contract by flashing it with light, causing the vocal cords to open and close. The scientists then managed to introduce the genes into the larynx of normal mice using an engineered virus, which was injected into the desired muscle group.
It’s hoped that this new research could help patients suffering from laryngeal paralysis, which can result from operations on the thyroid or nerve damage in the region. This prevents the muscles in the larynx from moving apart correctly, hindering a person’s ability to swallow and breathe. In extreme cases, when the muscles are completely paralyzed, a tracheostomy is often required.
Current techniques work by trying to stimulate the laryngeal muscles with electrodes. But “because there are different muscles with opposite function close together,” says Dr. Tobias van Bremen, also involved with the study, “it is almost impossible to stimulate these muscles individually using electrodes.” The researchers hope that optogenetics might solve this.
Nhãn: Health-Science