A+ A-
Print Email
First skin, now a limb: researchers have developed a “feeling” prosthetic leg that not only simulates some of the sensations that would normally be felt by a foot, but also helps to alleviate the phantom pain experienced by many amputees.
The artificial limb is the brainchild of Austrian scientist Professor Hubert Egger from the University of Linz, who made headlines five years ago with his mind-controlled prosthetic arm. Although it will be a while before we see his latest innovation rolled out, one amputee who has spent the last six months testing it out with Egger has shared with the media what it has done for him: 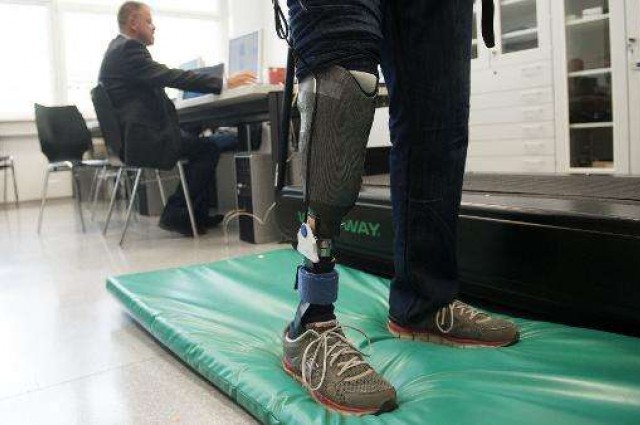 “It’s like a second lease of life, like being reborn,” Wolfgang Rangger told AFP. “It feels like I have a foot again. I no longer slip on ice and I can tell whether I walk on gravel, concrete, grass or sand. I can even feel small stones.”
While it is incredible to witness the mind-blowing ongoing developments in artificial limbs, such as 3D-printed robotic arms or thought-controlled prosthetics, these technologies have unfortunately been unable to restore an individual’s lost sensations. To overcome this problem, Egger developed a two-stage process.
First, a surgeon needs to rewire an amputee’s nerves, connecting the severed ends that would have innervated the foot to an area just below the skin surface of healthy tissue. Next, the foot sole of a lightweight artificial limb is fitted with an array of sensors that are hooked up to a series of stimulators that contact the stump. This means that every time a step is taken, information picked up by the sensors is relayed to the brain.
“In a healthy foot, skin receptors carry out this function but they are obviously missing here. However, the information conductors – the nerves – are still present, they’re just not being stimulated,” Egger explained to AFP.
“The sensors tell the brain there is a foot and the wearer has the impression that it rolls off the ground when he walks. All things considered, the procedure is a very simple one given the results.”
As an added bonus, the innovative prosthesis also helps to reduce the so-called “phantom pain” endured by many amputees, which is pain that feels like it originates from a missing limb or body part. This phenomenon is thought, at least in part, to be a result of the brain attempting to adjust to the loss of input from the missing limb, generating mixed signals. As the brain can now receive sensory signals once again, it no longer needs to seek information.
Another advantage is that the surgical procedure carries few risks. As Egger explains, “The only risk is that the nerves don’t reconnect properly and the feelings fail to return.”
Although the limb currently comes with a pricetag of around $11,000, as with any new technology this will hopefully come down over time as further developments are made. Ultimately, Egger hopes that this project could improve the lives of those in the Global South as well as those in developed nations.