A+ A-
Print Email
Almost 80% of crop pollination by wild bees is provided by just 2% of the most common species, say scientists. 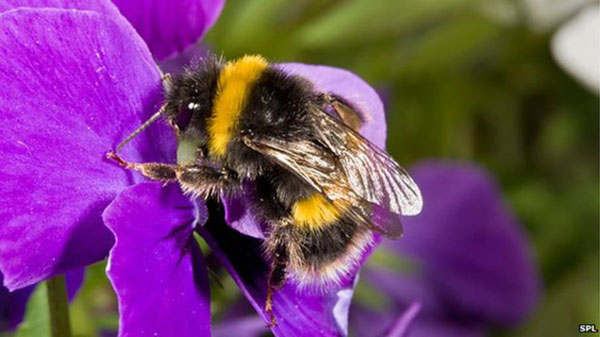 There are thousands of bee species in the world

In the UK, a small number of bees are vital for crops such as oilseed rape, apples and strawberries, according to the University of Reading team.
But protecting a wide range of bees would "provide an insurance policy against future ecological shocks, such as climate change", the scientists say.
The value of wild bee pollination is estimated at £1bn a year in the UK.


Prof Simon Potts, director of the Centre for Agri-Environmental Research at Reading, said: "The few bee species that currently pollinate our crops are unlikely to be the same types we will need in the future.
"It is critical to protect a wide range of bees and other insects now so that, as Britain's climate, environment and crop varieties change, we can call on the pollinating species which are best suited to the task.
"We can't just rely on our current starting line-up of pollinators.
"We need a large and diverse group of species on the substitutes' bench, ready to join the game as soon as they are needed, if we are to ensure food production remains stable."
Economic arguments
An international team of scientists reviewed data from five continents on the work of wild bees in pollinating crops.
The study, published in the journal Nature Communications, indicated the pollinating work of wild bees was worth about £1,900 per hectare globally.
Most of this work was done by a small number of common species, such as some types of bumblebees and solitary bees.
However, the researchers say conservation efforts should be aimed at a wide number of species - even those that currently contribute little to crop pollination - in order to maintain biodiversity and ensure future food security.
Dr Mike Garratt, of the University of Reading, said focusing only on wild bees that had financial value today for agriculture would be a mistake.
"That misses the vast majority of bee species," he said. "They are important pollinators of thousands of wild plants - we can't afford to lose that either."
The research adds to debate over the value of economic factors in conservation.
Benefits that people gain from nature - known as ecosystem services - are increasingly being used as an argument for conservation efforts.
In the case of bees, too much focus on services delivered - such as pollination - may lead to neglect of rarer species that could be important in the future, the scientists say.
Commenting on the study, Prof Pat Willmer of the University of St Andrews said: "The key point is that wild bees, mostly the solitary bees, matter greatly for crop pollination, just as many other studies just looking at one crop at a time have already shown.
"But crucially the commonest wild bees are the most important, which gives us the 'win-win' situation where relatively cheap and easy conservation measures can support these and give maximum benefit for the crops.
"For example, planting wild flowers with wider grassy margins around crops, as well as less intensive or more organic farming, all enhance abundance of the key crop-visiting bees."
Source: BBC
Nhãn: World-Region