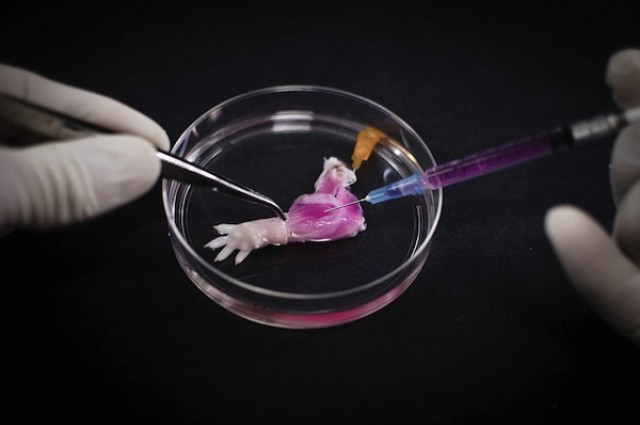 
In the latest step towards transplantable bioengineered parts, researchers have built rat forelimb tissue – complete with working blood vessels and muscle fibers – in the lab. After they transplanted the biolimb into a recipient rat, the blood vessels filled with circulating blood, and the muscles even flexed the rat’s wrists and the joints in its paws.
For people who have lost a limb, transplants could help to improve the quality of life. But this also means having to take immunosuppressant drugs so that their bodies don’t attack the donated parts. That’s why a lot research has focused on using the patients’ own stem cells to regenerate their own replacement tissues, but what’s been missing so far is the scaffold (or matrix) to provide shape and support for growing cells as they become the complex tissues that make up a limb.
So, a team led by Massachusetts General Hospital’s Harald Ott tried stripping away cells from an existing rat forelimb and then repopulating the remaining matrix with progenitor cells. This decellularization technique has previously been used to build bioartificial organs like kidneys, livers, hearts, and lungs in animals, but engineering tissues for a bioartifical limb is a different kind of task.
“The composite nature of our limbs makes building a functional biological replacement particularly challenging,” Ott explains in a news release. “Limbs contain muscles, bone, cartilage, blood vessels, tendons, ligaments, and nerves – each of which has to be rebuilt and requires a specific supporting structure called the matrix.”
First, they used a detergent to strip all the cellular material from forelimbs taken off deceased rats, but they made sure to keep the primary vasculature and nerve matrix. They spent a week removing all the cellular debris. Meanwhile, muscle and blood vessel progenitor cells were cultured separately. When the forelimb matrix was cell-free, the team suspended it in a bioreactor that provides a nutrient solution and electrical stimulation to promote growth (pictured to the right).
Vascular cells were injected into the limb’s main artery to regenerate veins and arteries, while muscle cells were injected directly into sheaths within the matrix that help define each muscle (pictured above). Two to three weeks later, when the forelimb was taken out of the bioreactor, the team looked for the presence of vascular cells along the blood vessel walls and muscle cells properly aligned throughout the muscle matrix.
To see if the new limb was functional, they applied electrical stimulation to the muscle fibers, which contracted with a strength that’s 80 percent of what you’d expect from a newborn rat. After the limb was transplanted into recipient rats, the vascular system quickly filled with blood that continued to circulate. With a bit of stimulation, the muscles within the graft flexed the rats’ wrists and the digital joints of the rats’ paws.
Next up, regrowing nerves! The work appears in the latest issue of Biomaterials.
Images: Bernhard Jank, MD, Ott Laboratory, Massachusetts General Hospital Center for Regenerative Medicine