A+ A-
Print Email
Russia accused NATO on Wednesday of reviving the ghost of the Cold War by encroaching close to its borders and seeking to change the strategic balance of power, as Germany denounced Moscow's nuclear weapons build-up as a Soviet-style reflex. 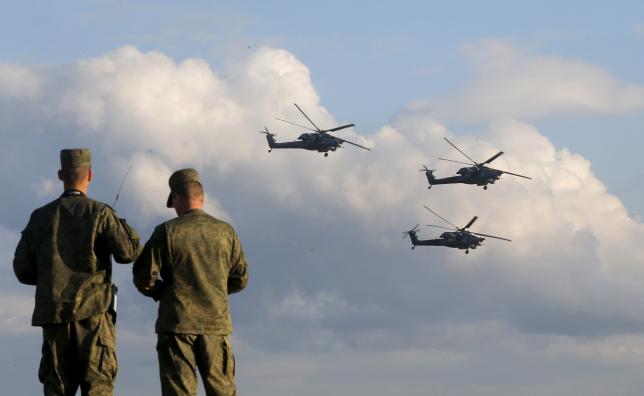 Ties between Russia and the West have hit new lows over Ukraine and the latest accusations come after Moscow said it would enhance its nuclear arsenal in response to Washington's plans to station heavy military equipment in eastern Europe.


"It's not Russia that's approaching someone's borders. It's NATO's military infrastructure that is approaching the borders of Russia," Kremlin spokesman Dmitry Peskov told reporters.
"All this ... forces Russia to take measures to safeguard its own interests, its own security."
Peskov said the West had increasingly resorted to "unconstructive and confrontational" Cold War-style rhetoric.
NATO Secretary General Jens Stoltenberg accused President Vladimir Putin of "saber rattling" on Tuesday after the Russian leader said Moscow would add more than 40 intercontinental ballistic missiles to its nuclear arsenal this year.
On Wednesday, German Foreign Minister Frank-Walter Steinmeier accused Putin of acting on Cold War reflexes.
Russia and the West accuse one another of endangering global security and the latest spat adds to tensions over Ukraine where Russia-backed separatist rebels seized land in the east after Moscow annexed Crimea from Kiev in early 2014.
Foreign Ministers from Russia, France, Germany and Ukraine will meet in Paris on June 23 to discuss the conflict in east Ukraine where a four-month-old ceasefire stemmed large-scale fighting but deadly skirmishes occur almost daily.
Putin's top foreign policy adviser said on Wednesday that Russia would not be dragged into an arms race with the West as this would hurt the economy.
"Russia is not entering an arms race. Russia is trying to react in some ways to certain threats but nothing more than that. We are not entering any arms race because that would hurt our capabilities in the economic sphere," Yuri Ushakov said.