A+ A-
Print Email
Russia said it has made some suggestions on how blame could be determined for chemical weapons attacks in war-torn Syria and will discuss the issue on Friday with the United States, which is pushing for the creation of a team of U.N. investigators. 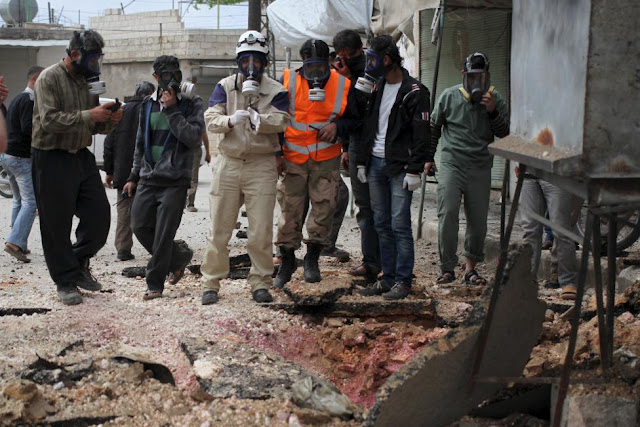 Civil Defence members wear gas masks near damaged ground in Ibleen village from what activists said was a chlorine gas attack, on Kansafra, Ibleen and Josef villages, Idlib countryside May 3, 2015.

The United States gave Russia a draft United Nations Security Council resolution to study six weeks ago that would establish an accountability procedure in an attempt to pave the way for council action against those responsible.


"If this is to be done, definitely there will need to be a resolution, but we're wondering what would be the most straightforward and rational way to deal with this subject," Russian U.N. Ambassador Vitaly Churkin told Reuters on Thursday.
"We have some ideas, we shared them with our American colleagues, they are thinking them over and tomorrow we're going to have another discussion," he said. "I don't want to go into details but I think there is a way to deal with this subject."
Syria agreed to destroy its chemical weapons in 2013, but the Organization for the Prohibition of Chemical Weapons has since found chlorine gas has been "systematically and repeatedly" used as a weapon. The group does not have a mandate to lay blame.
Government and opposition forces have denied using chlorine.
The Security Council threatened in March to take action if toxic chemicals were used again. Ten days later, six people were killed in a chlorine attack in Sarmin village, medics said.
Chlorine is not prohibited, but its use as a weapon is prohibited under the 1997 Chemical Weapons Convention, which Syria joined in 2013. If inhaled, chlorine gas turns to hydrochloric acid in the lungs and can kill by burning lungs and drowning victims in the resulting bodily fluids.
"We envision a (accountability) mechanism that would fall under the U.N., but that would involve some cooperation with the Organization for the Prohibition of Chemical Weapons," a U.S. official said on Thursday.
Russia is a Syrian ally and has protected President Bashar al-Assad from council action during the four-year civil war.
Churkin said if there was a "good" meeting between Russian and U.S. diplomats on Friday, then "I don't see why it should take too much time to have a resolution."
The United Nations says some 220,000 people have been killed and an estimated 7.6 million are internally displaced. Another 4 million people have fled the country