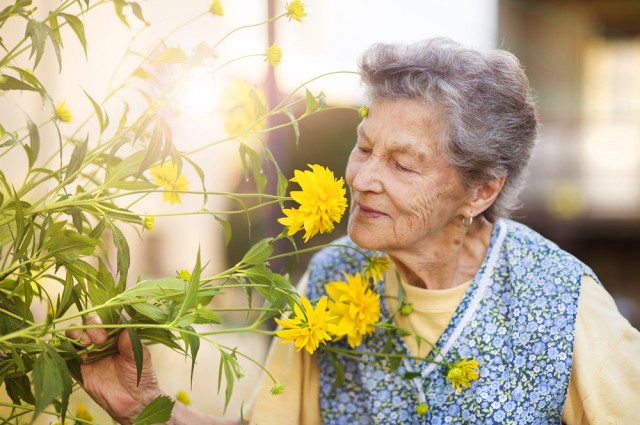 Dramatic headlines such as “Your sense of smell could predict when you’ll DIE” understandably caused quite a stir last year, which were the result of a study that found how well an older person’s olfactory, or smell, system is functioning can strongly predict the likelihood of death within five years. People may raise their eyebrows over this conclusion, but there is science behind the madness: Olfaction is actually linked to a wide range of physiological processes in the body. And now, it seems there is further evidence to support this idea, as a large new study has just backed up these findings.
For this latest investigation, researchers from Columbia University enrolled more than 1,000 older adults from a range of ethnicities. Individuals were provided with 40 “scratch and sniff” strips, each one laced with a different scent. After giving them a good old whiff, participants were asked to identify each individual odorant from a multiple choice list displaying four different possibilities. Participants were then followed up at two-year intervals, for an average of four years, using either interviews or the National Death Index.

As described in Annals of Neurology, during follow-up investigations, 30% of the participants died. Of these, the researchers found that they were more likely to be older, male, have low scores on the smell identification test and have a diagnosis of dementia. Furthermore, the observed relationship between test performance and death persisted even after things like age, sex, education, medical burden, dementia, depression, smoking and BMI were controlled for. Those falling in the lowest bracket had a 45% mortality rate, compared with 18% for those with the highest scores.
With studies such as this, there is always the limitation that they cannot discern between cause and effect, only identify that associations exists. Still, scientists have suggested that rather than contributing to the likelihood of death, reduced olfactory function may instead be an early warning sign that damage has occurred in the body. And since the olfactory system is linked with key parts of the central nervous system, the damage could be significant.
For example, our sense of smell depends on the regeneration of cells in certain parts of the brain—such as the hippocampus, our learning and memory hub—and this regenerative capacity is known to reduce with aging. On the flip side, this system also helps us maintain our health, for example by enabling us to detect hazards in the environment or maintain adequate food intake through appetite.
So does this test mean that you’re going to die in a few years if you don’t have such a keen schnozz? No, it just means that an association exists, and that deficits in our smell system could help indicate the likelihood of death in older individuals. An interesting way to take this research forward would be to start examining different age groups, as at the moment it’s impossible to say whether these findings apply to young or middle-aged people.
Nhãn: Health-Science