A+ A-
Print Email
A solar-powered plane that is attempting a record-breaking flight around the world has been damaged after making an unscheduled stop in Japan. 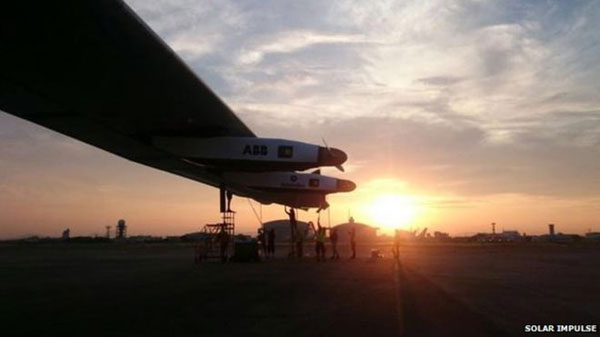 The plane was tied down at the airport, but without a cover its wings were damaged

The Solar Impulse aircraft was forced to land on Monday after weather conditions worsened while it was flying across the Pacific Ocean.
It touched down smoothly, but gusts of wind damaged its delicate wings in the hours after landing.
The team is confident it can repair the plane and continue the epic journey.


Solar Impulse's co-founder, Andre Borschberg tweeted: "Small damage on one of the aileron of @solarimpulse which will necessitate at least a week to repair but not a major issue."
It has been a challenging few days for the Solar Impulse team.
The experimental plane, which has 17,000 solar cells on its wings, began its circumnavigation of the globe in Abu Dhabi in March.
The first six stages of the flight were relatively straightforward. But the seventh leg - an 8,000km-flight across the Pacific - has proved difficult.
The team waited for more than a month in Nanjing, China, for the right weather conditions to travel over the ocean towards Hawaii.
They thought they had found the perfect window, and set off on Saturday at 18:39 GMT.
However a cold front forced the team to cut the journey short, and the plane made an unscheduled stop in Japan on Monday at 23:49 local time (14:49 GMT).
Mr Borschberg, who was piloting the plane, made a smooth landing at Nagoya Airfield.
However, not all of the craft's essential ground-support equipment had arrived at the site, including a mobile hangar, which protects the plane from the elements.
Instead, the team had to use a tie-down system to hold the plane in place - working in shifts over 24 hours to hang onto the ropes.
But this was not enough to prevent the plane's 72m-long wings from getting damaged by the gusty conditions on the ground. The part that was damaged is called the aileron - a hinged control at the tip of the wing that is used for turning left or right.
The mobile hangar has now arrived and the plane is safely under cover. The team has been assessing the damage to the wing.
Bertrand Piccard, Solar Impulse's other co-founder, said: "This, of course, will be repaired.
"The technical team has already started to build some spare parts, but it will keep us on the ground for at least one week before we can carry on, and before Andre can continue the flight to Hawaii.
"It's not a big issue for the project itself, but it's a little additional delay."
After the plane is fixed, meteorologists will start looking for a weather window to make another attempted crossing of the Pacific.
The flight to Hawaii will be slightly shorter now the plane has been diverted to Japan, but forecasters will still need to find at least four days of clear weather before mission control gives the green light to the flight.
However, if the repairs take longer than expected or the weather fails to clear, the fear is that further delays could affect the later stages of the global circumnavigation.
After the plane has crossed the Pacific, it will then need fly across America before taking on the Atlantic.
Ideally, it will need to cross this second large stretch of ocean before August, when the hurricane season peaks.
Source: BBC
Nhãn: World-Region