A+ A-
Print Email
Steady advances by rebels on key fronts in Syria mean President Bashar al-Assad is under more military pressure than at any point in the four-year-old war. 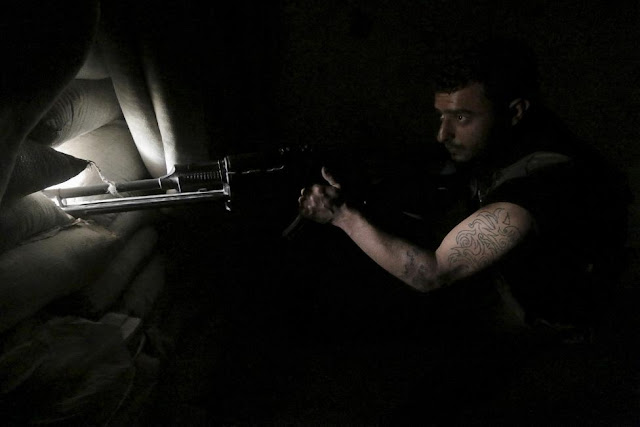 A rebel fighter takes position behind sandbags in Aleppo's Al-Ezaa neighborhood, Syria, May 20, 2015.

Losses in the north, east and south to groups including al Qaeda's Syrian arm and Islamic State may test Assad's hold over western parts of the country that are the most crucial to his survival.
After his loss of Palmyra, a symbolic and militarily strategic city, and nearly all of Idlib province, he appears to be circling his wagons more closely to a western region that includes Damascus, Homs, Hama and the coast.


Sources familiar with the thinking in Damascus acknowledge that pressure is growing but say the government is confident the army can defend crucial territory with the help of its allies.
Assad still controls areas in more far-flung parts of Syria, but these are dwindling in number. His decision to maintain forces in places such as in Deir al-Zor, Hasaka and Aleppo suggests he still wants to preserve a nationwide presence, rejecting Syria's de facto partition.
Sources familiar with the government's thinking say Assad is confident about standing his ground: extra support is expected from Iran, his strongest ally, which said on Tuesday it would continue to stand by Syria. The Lebanese group Hezbollah, which is backed by Iran, is more widely deployed in Syria than ever.
And Assad still believes the West will eventually rehabilitate him as a partner in the fight against Islamic State - a shift that shows no sign of happening but which he thinks is inevitable given the risk of a full jihadist takeover.
"The summer will be tough on the ground, but red lines will not be breached," said one source familiar with the thinking in Damascus, declining to be named because he was discussing private conversations with Syrian officials.
Assad has survived such pressure before, notably at the end of 2012 when the West thought his government was near collapse. But the difference now is that the insurgents have grown in strength while government forces have been weakened after more than four years of fighting.
Assad has also lost Iraqi Shi'ite militiamen who had been fighting alongside Syrian forces. They went home to fight Islamic State after it captured Mosul and other Iraqi cities last June. The sudden advances also added to the military pressures facing Iran both in Syria and Iraq.
Insurgent groups in the north and south of Syria have emerged as the war's most dynamic force in the past two months. They are better organized and armed than before and are believed to have received new support from Assad's regional enemies.
"Clearly the trends right now are working against the regime, but it appears the regime's backers - and Iran in particular - may increase their support in an attempt to reverse those trends," said Noah Bonsey, senior analyst with the International Crisis Group thinktank.
"It is too early to tell what such an escalation could achieve," he said. "The regime is still seeking to maintain as much of its geographic reach as it can."
Lebanon's As-Safir newspaper on Tuesday said more than 20,000 Iraqi, Iranian and Lebanese fighters had entered Idlib province in readiness for a counter attack. Reuters was not able to independently verify the report.
Where is the support?
Public concern about the war has surfaced in government-held areas where most of the population still lives. The Syrian lira has weakened.
Foreign Minister Walid al-Moualem fielded tough questions during a televised news conference in Damascus last week, including whether Syria was now in fact partitioned.
One journalist put it to him that Iranian and Russian statements of support were failing to halt insurgent advances. People were asking why this support was not more apparent on the ground, the journalist said.
"This question is certainly asked in the popular opinion," Moualem said. The relationship with Russia and Iran "is deeper than some think", he added.
A diplomat who tracks Syria said the tone reflected a new government willingness to admit vulnerability.
"It's a change in their attitude," the diplomat said. "The general mood is black."
The deputy head of Israel's armed forces said this week the Syrian military had "ceased to exist, de facto", while Hezbollah was investing in thousands of its fighters in Syria.
Others describe the situation in less dire terms, and say the army is still able to defend government-held areas.
State TV airs videos reassuring Syrians the army is in good shape, displaying its weapons and showing bare-chested soldiers breaking concrete with their arms.
"We believe in the capacity of the army to restore security for every inch of Syria," the headline of a recent state media report read, citing Prime Minister Wael al-Halaki.
Tactical withdrawal
Assad is still determined to hold on to energy installations needed to supply government-held areas, including gas and oil fields east of Homs. Last week he despatched Halaki on a visit to the Sha'ar gas field, which had previously fallen to Islamic State but was recaptured after fierce battles.
An offensive by the army and Hezbollah against insurgents including the Nusra Front in the Qalamoun mountain range north of Damascus is also crucial.
The diplomat said: "It will be very difficult for armed groups to take (Damascus), because it will be a battle not just for land, but a fight for survival." But Latakia on the coast and Homs could be harder to defend.
The Syrian government views the fall of Palmyra as a tactical defeat but a strategic gain, said Salem Zahran, a Lebanese pundit with close ties to Damascus.
Islamic State's capture of the city and its UNESCO World Heritage site should encourage Washington to review its Syria policy, would make U.S.-allied Jordan take greater notice of the Islamic State threat, and force Iraq to cooperate more with Syria, he said, reflecting the view in Damascus.
Damascus is also counting on Syria climbing up Iran's list of priorities once Tehran signs a nuclear deal with world powers, Zahran said.
But previous assumptions that Assad could not be defeated due to his superior military strength underpinned by the air force were no longer valid, the diplomat said. The insurgents were building on their momentum and had more recruits.
"For every 100 soldiers lost by the regime, there are not 100 more coming in," the diplomat said.