A+ A-
Print Email
Syria's defense minister has visited army units to the east of Homs city, state television reported on Thursday, in what appeared to be the latest in a series of morale-boosting trips by senior officials to military outposts. 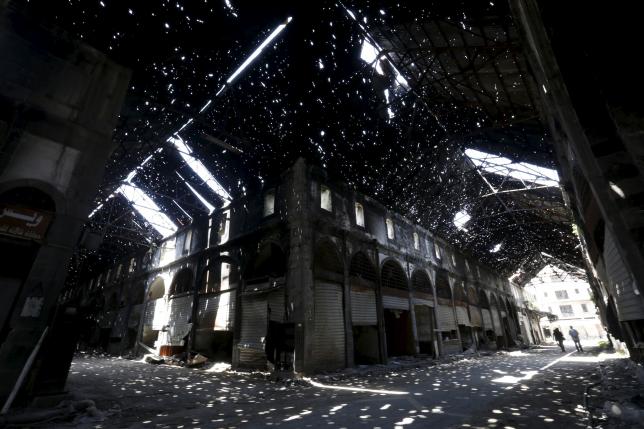 A general view shows the damage at the old souk of the old city of Homs June 3, 2015.

The government has lost large areas of land in the last two months to insurgents including the al Qaeda-linked Nusra Front and the Islamic State group that last month seized the ancient city of Palmyra in Homs province.
General Fahad Jassim al-Freij, who is armed forces deputy commander as well as defense minister, told the troops in the eastern Homs countryside he was confident in their ability to defend Syria from what he called "terrorism and its supporters".


Homs lies 150 km (90 miles) to the west of the Palmyra, also known as Tadmur. The Syrian army and militia fighting alongside it have also lost swathes of territory in the northwestern province of Idlib to an alliance of insurgents including the Nusra Front.
State media reports did not give the exact location of Freij's visit. A video showed vehicles driving on a dusty road through a desert landscape and Freij addressing troops outside.
It is at least the second high-level visit to Homs since the fall of Palmyra. Prime Minister Wael al-Halaki has also been, visiting a gas plant that is a major source of fuel for government-held areas.
Homs governor Talal al-Barazi voiced confidence in the military, saying he expected it to retake Palmyra, also known as Tadmur, at "the appropriate time" and that it would win back land all the way to Suknah town to the east.
"I believe that all Syrians in areas near to the frontlines with the gunmen are concerned, and the concern grows as (gunmen) get near a place, because this criminal monster causes worry for any civilian in any place," he told Reuters Television in an interview in Homs city.
But he added: "There is no collapse, no psychological defeat." He said the army had decided against fighting Islamic State in Palmyra itself "to avoid civilian casualties and to protect the ancient city".
Palmyra was the first time that the hardline Islamic State group had captured a city directly from the Syrian military and allied combatants.
The military has also been pushed back by an insurgent alliance including al Qaeda's Syria wing in northwestern Syria which has brought them closer to Latakia, Assad's ancestral homeland.
In the northeast, Syrian troops and militia battled on Wednesday to repel an Islamic State attack on the city of Hasaka and a Kurdish official said the government forces may not be able to hold off the jihadists.