A+ A-
Print Email
Ukrainian troops and separatists on Wednesday fought their first serious battles in months and Ukraine's defense minister said an attempt by rebels to take the eastern town of Maryinka had been thwarted. 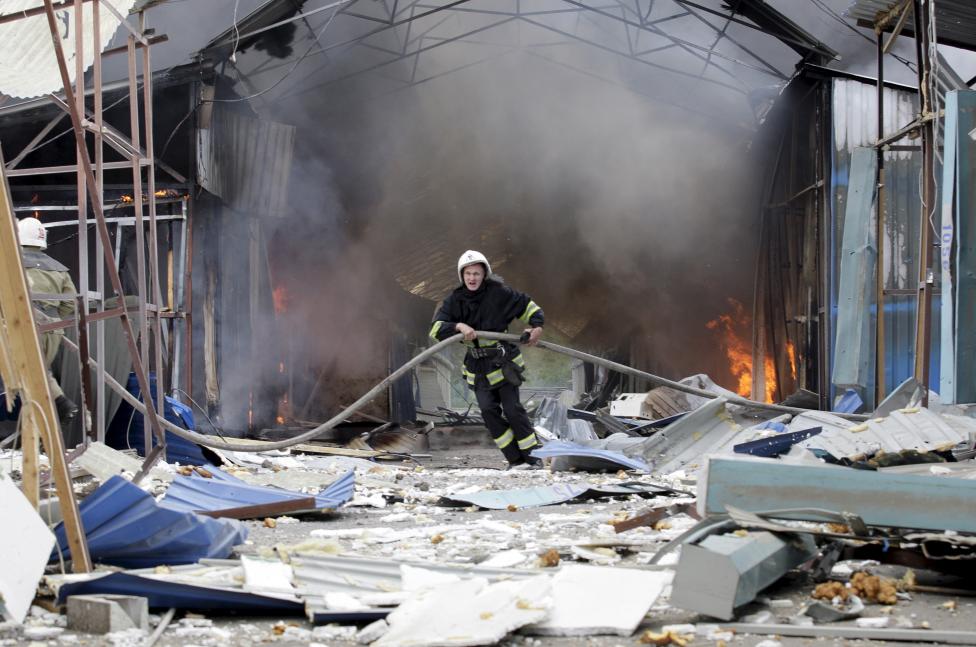 A firefighter works to extinguish a fire at a local market, which was recently damaged by shelling, in Donetsk, Ukraine, June 3, 2015.

The Ukrainian military said the Russian-backed rebels had tried to advance using tanks and up to 1,000 fighters west of the main rebel stronghold of Donetsk, in the most significant escalation of the conflict in about three months and in defiance of a ceasefire deal.


Estimates of casualties varied.
The separatists, who denied their forces had launched an assault, said 15 people had been killed when government troops fired artillery into rebel-held territory near the city.
A Ukrainian presidential spokesman, Yuri Biryukov, on his Facebook page put total casualties at 7 p.m. (1600 gmt) at two dead and 30 injured, while regional police chief Vyacheslav Abroskin said three civilians had been killed.
In Moscow, the Kremlin immediately took the side of the separatists, accusing the Ukrainian armed forces of carrying out provocative actions.
"In Moscow, we are following very closely, and are deeply concerned by, the provocative actions by the Ukrainian armed forces that are, as far as we can see, provoking the situation," Kremlin spokesman Dmitry Peskov told journalists on a call.
Russian Foreign Minister Sergei Lavrov said those responsible for the fresh fighting were trying to halt progress in internationally-brokered peace talks.
Washington blamed Moscow for the violence. "Russia bears direct responsibility for preventing these attacks and implementing a ceasefire. Any attempts to seize additional Ukrainian territory will be met with increased costs," State Department spokeswoman Marie Harf told reporters.
Ukraine said the separatists had launched an early morning assault on government-held Maryinka, a town 15 km (9 miles) west of Donetsk which had a pre-conflict population of about 9,900.
Heavy weapons
The fighting, in which both sides used heavy weapons, went far beyond the regular low-level skirmishing which has regularly punctuated a ceasefire brokered in February by the leaders of Ukraine, Russia, Germany and France.
The fighting started around 3 a.m. (midnight GMT) and ended almost 12 hours later.
"For the moment, storming operations have been halted," Ukrainian Defense Minister Stepan Poltorak told reporters.
A military spokesman was later quoted by Interfax news agency as saying that separatists had launched new attacks on Maryinka and that parts of the town were on fire. Other spokesmen said government troops were in control.
Many heavy weapons have been pulled back under the ceasefire agreement brokered in Minsk, Belarus, to put the warring sides out of range of each other's big guns.
But the Ukrainian military acknowledged it had used heavy weapons in the latest fighting. "For the purpose of appropriate response, we were forced to use heavy artillery," military spokesman Oleksiy Mazepa said on television channel 112.
Senior rebel commander Eduard Basurin said separatist forces had only used weapons in defense, denying any attempt to advance.
"We are not carrying out offensive actions," separatist press service DAN quoted him as saying.
The separatists said more than 900 miners had been trapped underground after the clashes caused a power failure at two large mines, Skochinsky and Zasyadko, in Donetsk. They were later evacuated, the separatist emergency services said.
Ninety people, wounded in shelling on Wednesday, had to be evacuated along with other patients from a hospital in Donetsk's Petrovsky district, after the building was also cut off from power, head doctor Igor Rutchenko was quoted as saying by DAN.