Up to 70 killed in Nigeria fuel tanker crash

A+ A-
Print Email
Up to 70 people were killed in Nigeria, many of them burnt alive, when a fuel tanker crashed into a busy bus station in the southeast city of Onitsha and exploded, Red Cross officials said on Monday. 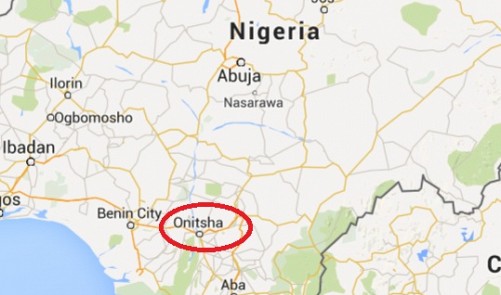 The southeast Nigerian city of Onitsha is seen in this screen capture from Google Maps.

Dozens of others were injured in the Sunday afternoon incident, in which 13 nearby vehicles were also incinerated.
"Most people were burned beyond recognition," said Emeka Kachi, vice-president of the local Red Cross. "We are transferring the corpses to a teaching hospital for DNA testing so that their relatives can identify them for a proper burial."
A police spokesman said the tanker was speeding before it veered out of control. He put the death toll at 23, with seven injured.
The accident came five days after the end of a strike by fuel marketers who halted distribution as part of a pay dispute with the outgoing government, which was replaced on Friday by an administration led by former military ruler Muhammadu Buhari.
While Nigeria is Africa's biggest crude oil producer, neglected refineries mean it is almost wholly reliant on imports for the 40 million litres of gasoline it consumes each day.