A+ A-
Print Email
The Catholic Church's commissioner for the protection of children has described the Vatican's finance chief as having an almost sociopathic disregard for abused children, accusations the Australian cardinal rejected as wrong and misleading. 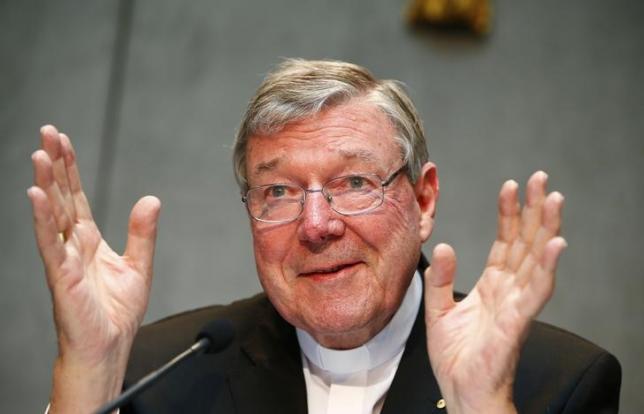 Pope Francis's newly appointed child abuse commissioner, Peter Saunders, said on Australian television the Vatican's prefect for the Secretariat for the Economy, Australian-born Cardinal George Pell, should be dismissed over allegations he failed to take action to protect children from abuse in the church in Australia.


"He is making a mockery of the papal commission (into child abuse), of the Pope himself, but most of all of the victims and the survivors," Saunders said on Channel Nine's 60 Minutes Australia on Sunday.
"He has a catalogue of denigrating people, of acting with callousness, cold-heartedness, almost sociopathic I would go as far as to say, this lack of care," said Saunders, a British victim of abuse.
He said Pell should be "moved aside" and sent back to Australia to address a separate Australian abuse inquiry.
Pell issued a statement soon after the programme aired, describing Saunders's comments as "false", "misleading" and "outrageous", and said he would consult legal advisers.
Pell, the former archbishop of Sydney and Australia's most senior Catholic, has repeatedly denied claims raised in the Australian inquiry that he moved priests accused of abuse between parishes and offered one victim inducements to drop a complaint.
That inquiry has focused in recent weeks on the rural town of Ballarat, where Pell was an assistant priest in the 1970s.
Pell, in the statement published by the network on his behalf, said he had never met Saunders and had always taken a strong stand against child abuse.
Pell said the inquiry's recent hearings in Ballarat in Victoria state had raised old allegations of which he had already been cleared.