A+ A-
Print Email
LOCAL man Kevin Bridges shared yet another article from the Guardian online today in a bid to gain kudos from his learned mates, despite not actually reading the 768 word piece at all.
After spotting the headline on a friend’s Facebook page, Bridges quickly realised the article’s potential as another one of those ‘intellectual posts’ that would attract lengthy debate among those on his account who just love to show off their vast array of knowledge. 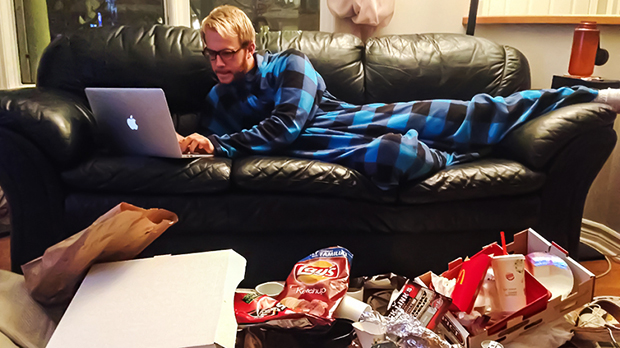 “It’s about American Foreign policy in the middle east or something,” he told WWN, admitting he was not really bothered about its content. “I’ll kick things off with a ‘classic America’ comment to get the lads going, and then just mirror what everyone else is saying.
“Hopefully no one will challenge me too much on it,” he added.
Refreshing his post some five minutes later, Bridges’s Guardian article had already gained 4 likes from the very friends he was aiming to impress.
“Watch now, Gerry from work liked it first and hasn’t commented yet. It’s gonna be a long juicy one packed with useless facts I bet,” said the 28-year-old onesie fan. “Hopefully Niall from school will step in with some stupid conspiracy theory. Always fun to mock.”
Following the successful post, Kevin Bridges confirmed a total fourteen likes and 56 comments, pushing him further up the social media pedestal of intellectual fame.
“I even got away with a direct copy and paste from Wiki in one of my comments,” he concluded. “My work here is done.”
Nhãn: Lifestyle