A+ A-
Print Email
A SELFISH young woman has needlessly added to the stress of flying by doing that annoying quiet crying thing next to you on the 9.15am Ryanir flight to Stansted.
Despite the fact that everyone at times is nervous at the prospect of flying, one particular passenger decided to make it all about themselves by appearing to have a mild panic attack, though clearly trying to disguise this from everyone else on board. 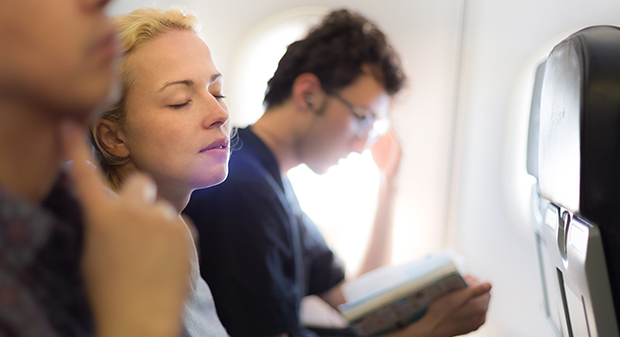 The woman, seemingly unaware that you too had to deal with the limited leg room and the fact that the seats don’t go back, carried on with her whimpering giving you no choice but to turn up the volume on your music.
In yet another example of the merits of priority queuing and paying for a preassigned seat, the self-absorbed woman was using both armrests, milking dry all of the benefits of being in the middle seat.
Thankfully the noise cancelling technology in your headphones provided the perfect aural cocoon, silencing her overdramtic crying even if you could still see her out of the corner of your eye shaking.
Such were her histrionics, the cow even got sick into a sick bag before the plane took off, providing you with seconds of discomfort until a member of the cabin crew offered her some water, taking away the bag.
It is thought the woman will be one of over 3,000 women proving a nuisance to other passengers on flights to the UK in 2015.
Nhãn: Lifestyle