A+ A-
Print Email
SOME young fella in fifth year has a motorbike and likes to sporadically pull up beside loitering school friends for no apparent reason, it has been revealed today.
Jimbo Halligan, 16, acquired the 125cc shortly after his birthday, but claims to have bought the bike himself despite not having any disposable income.
“His mother bought it for him cause the father ran away with some young wan,” said classmate Gerry Roche, who spotted Halligan chatting to some girls in Lidl car park earlier. “All he does is drive around the town thinking he’s great. No one likes him at all. The girls only talk to him cause he’s got a bike. 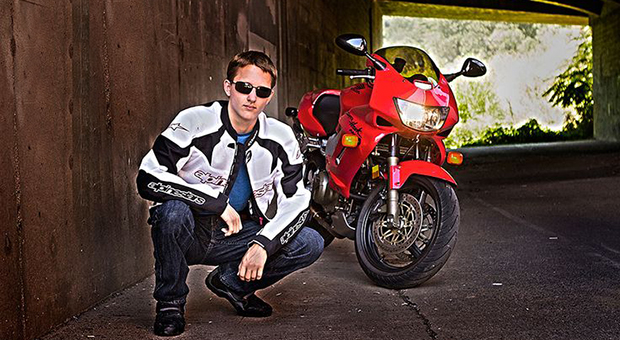 “I heard he shit his pants in Junior Infants.”
While no one is entirely sure as to the origins of the motorbike purchase, every pupil around the town is in agreement that Halligan, who has managed to get a string of girlfriends thanks to his bike, is a complete prick.
Carefully driving down main street, the grandson of four revved his engine ever-so-slightly while passing a bunch of hooded teenagers, before accelerating off at speed, but still adhering to the strict 50km speed limit.
“He does that every fuckin’ time boys,” shouted sixth year student Tommy Daly angrily, who was smoking fags with friends he made from smoking down the back lane after school.
“I heard his mother’s an alco and slept with Mr. Brent in economics class,” confirmed Daly, who it is believed was promised a hand job from Ciara Lyons at a free gaff last weekend but gave Halligan instead once she saw that biker jacket on him.
Halligan has received near universal derison due to his ownership of a motorbike that no one else in school would be caught dead on, obviously.
“I hope he gets hopped off the thing,” wished 16-year-old Jason Ryan, who was expelled from school last year for setting fire to a cat. “If he revvs that thing one more time around me I’ll tear him off the thing and kick his teeth in,” added Ryan, his comments in no way motivated by intense jealousy.
Nhãn: Lifestyle